The Royal Swedish Academy of Sciences announced that three researchers will share this year’s Nobel Prize in Physics for their invention of blue light emitting diodes (LEDs). The prize committee emphasized that the work done by Isamu Akasaki of Meijo University and Nagoya University, Hiroshi Amano of Nagoya University, and Shuji Nakamura of the University of California at Santa Barbara launched a revolution in energy-efficient lighting. 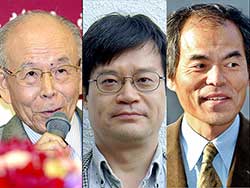 “Thanks to the blue LED, we can now get white light sources which have very high efficiency and very long lifetimes,” said Staffan Normark, the permanent secretary of the Royal Swedish Academy of Sciences. “This LED technology is now replacing older technologies.”

Red and green LEDs have been around since the 1960s, but blue LEDs proved much more difficult to fabricate. The difficulties lay in creating high quality gallium nitride crystals and then combining them with other elements to increase their efficiency. It took nearly thirty years of work in basic materials physics, crystal growth, and device fabrication to create a marketable blue LED.

In 1992, while at the Nichia Corporation in Tokushima, Japan, Nakamura and his collaborators, who were also working on the problem, helped explain how electron irradiation eliminated some of the inefficiencies Akasaki’s team had been encountering.

Both research teams were then able to create the gallium nitride alloys needed to create the junctions between semiconductor layers that are the building blocks for blue LEDs. Nakamura and his team saw the first efficient blue glow in 1994, and over the following two years, both teams created the first blue lasers. In 1999, Nakamura left Nichia to join the faculty at the University of California, Santa Barbara.

Members of the committee emphasized how the practical uses of the device were the deciding factors behind their choice for this year’s prize. “This is really an invention prize, it’s less a discovery prize,” said Anne L'Huillier, a physicist at the academy and member of the committee. “In this kind of prize we really emphasize the usefulness of the invention.”

The researchers’ work has already made it into many common electronic devices. Blue LEDs can be found in most touch screen devices. White LEDs usually use a blue LED to excite a phosphor to emit white light, and can be found in the camera flashes of most modern smart phones.

“We emphasized very strongly the fact that it can be used for white lighting, but we’ve seen over the years how the invention of the blue light emitting diode was used in the blue laser diodes, used for optical storage, how coming generations of communications will rely on the use of light rather than radio waves, in li-fi rather than wi-fi. In how you can use this blue or UV light to sterilize water,” said Olle Inganäs, a physicist at the academy and member of the prize committee. “There are so many uses of this, and these uses are what I think would make Alfred Nobel very happy.

He added that increasing energy efficiency around the world is one of the most promising applications. “What you see is of course an enormous increase in power efficiency,” Inganäs said. “Something like a fourth of our electricity consumption in most industrialized economies goes towards illumination so these effects, having much more light for much less electricity, is really going to have a big impact on our modern civilization.”