Francois Englert and Peter Higgs won this year's Nobel Prize in Physics for predicting the Higgs mechanism, the process that gives elementary particles their mass. This comes one year after CERN observed the Higgs boson at the Large Hadron Collider. 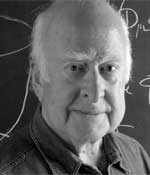 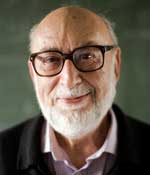 APS President Michael Turner Congratulates CERN and all of Physics

This year’s Nobel Prize for physics was awarded to Francois Englert at the Universite Libre de Bruxelles and Peter Higgs from the University of Edinburgh, for developing the theories of the Higgs field and Higgs boson. Collectively, their research explained why elementary particles have mass, and provided the foundation for the Standard Model of particle physics that unifies the weak and electromagnetic forces.

The committee’s official citation reads, “For the theoretical discovery of a mechanism that contributes to our understanding of the origin of mass of subatomic particles, and which recently was confirmed through the discovery of the predicted fundamental particle, by the ATLAS and CMS Experiments at CERN’s Large Hadron Collider.”

Physicists have been working to isolate the elusive Higgs boson and confirm the underlying Higgs mechanism in the decades since it was first predicted in the 1960s. CERN announced the discovery of the particle at the Large Hadron Collider in Geneva, Switzerland on July 4th of last year. The Higgs boson was the last missing piece of the Standard Model that needed to be discovered. “This year’s prize is about something very small that makes all the difference,” said Staffan Normark, Permanent Secretary of the Royal Swedish Academy of Sciences.

“The boson by itself is something that is the experimental test of the existence of the whole mechanism and one had to wait,” Englert said at the press “It took some time to first prove the consistency of our theory … During the ‘70s the standard model was built up and only after that could one look for a test because the standard model was wonderfully verified, except for the missing element, which was that boson, whose condensation is what gives the mass to particles and short range forces.”

To experimentally isolate the particle, scientists constructed the world’s largest and most powerful particle accelerator under Switzerland and France. The LHC’s 17-mile ring whips protons around its track at energies up to 7 TeV. After smashing together the accelerated particles, scientists painstakingly scrutinized the remains for any telltale signs of a decayed Higgs. After two years of operation, and more than 300 trillion individual collisions, the LHC’s two detector collaborations jointly announced their discovery of the Higgs boson at last July’s press conference. "The discovery of the Higgs boson has captured the imagination of physicists and the public alike," said American Physical Society president Michael Turner. "It is hard to find a cab driver anywhere in the world who when he knows you are physicist doesn't ask about the Higgs boson. This is a tremendous achievement, involving more than 10,000 physicists from the around the world to build, operate and analyze data from the most complex and most expensive science experiment ever built."

The theory of what would ultimately be called the Higgs field was first proposed in three Physical Review Letters papers written by six people on three independent teams, all published in 1964. The researchers’ theories explained the “broken symmetry” of particle masses, and also showed why photons, the particles that carry the electromagnetic force, have no mass while W and Z bosons, the purveyors of the weak nuclear force, can be massive. The Higgs mechanism effectively unified the weak and electromagnetic forces. These papers laid the groundwork for the later development of the Standard Model of particle physics.

Englert and Higgs were part of the sextet of physicists, along with Carl Hagen from the University of Rochester, Gerald Guralnik of Brown University, Tom Kibble at the Imperial College and Englert’s now deceased colleague, Robert Brout, also from the Universite Libre de Bruxelles, who received APS’s 2010 J.J. Sakurai Prize for Theoretical Particle Physics for their work reported in the 1964 papers. Five of the six traveled to snowbound Washington DC in February of 2010 to receive the Prize. Higgs was unable to attend, citing health concerns.

Traditionally the Nobel Prizes in science are each awarded to at most three individuals in a given year. Whole organizations have been awarded the Peace Prize, including the Intergovernmental Panel on Climate Change in 2007 and the United Nations in 2001, but the Nobel Committee has stuck fast to the three-person rule for the scientific prizes since the inception of the award. Prior to this morning’s announcement, there was some speculation that they might break with tradition and recognize the five surviving Sakurai Prize recipients, or possibly all of CERN for their experimental discovery.

“It’s unfortunate that this Nobel Prize is limited to only three recipients,” said R. Sekhar Chivukula, the 2010 chair of the APS Sakurai Prize Selection Committee, “because failing to recognize the work of Hagen, Guralnik, and Kibble is a significant oversight. I’m glad that the APS could award a prestigious prize in a way that makes clear just how important they all were in establishing the foundations of contemporary particle physics.”