Nuclear Physicists Look to the Future

The 2015 Long Range Plan for Nuclear Science is unanimously approved 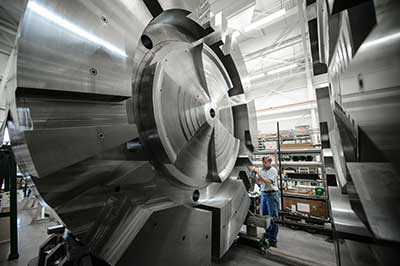 These massive cyclotron components will be used at the Facility for Rare Isotope Beams being built at Michigan State University.

To prepare for the future, nuclear scientists have united behind a report outlining their priorities for research in the next decade. At a meeting of the Nuclear Science Advisory Committee (NSAC) on Thursday, members voted unanimously to approve the plan.

The 150-page plan makes four major recommendations for nuclear research: capitalize on recently completed and ongoing construction projects and upgrades to major facilities; develop a ton-scale, US-led neutrino-less double beta decay experiment that could indicate whether neutrinos are their own antiparticles; construct a high-luminosity electron ion collider; and increase funding for small- and mid-scale projects.

The committee hashed out the impact of varying funding scenarios on accomplishing these goals. These goals would be achievable with yearly budget increases of 1.6% beyond inflation, the report indicates. But even if funding increases only at the pace of inflation, nuclear physicists say they could still meet their main objectives, although the science reach would be more limited.

The plan also highlights two initiatives that would undergird their recommendations: one to support nuclear theory research, and one to support detector and accelerator R&D.

Finally, the committee emphasized the importance of training young scientists and students in nuclear science, and recommended boosting programs in that area, including the Research Experiences for Undergraduates (REU) program, the National Nuclear Physics Summer School, and fellowships for postdocs.

NSAC advises both the Department of Energy (DOE) and National Science Foundation (NSF) on basic research in the nuclear sciences. It has produced six long-term plans since 1979, with the previous plan in 2007. In April 2014, the agencies charged NSAC with creating a new report.

The current plan builds on the successes of the 2007 guidelines. An upgrade to Continuous Electron Beam Accelerator Facility (CEBAF) at Jefferson Lab is nearly complete, and the Relativistic Heavy Ion Collider (RHIC) at Brookhaven National Lab received an upgrade as well. The Facility for Rare Isotope Beams (FRIB), at Michigan State University, is now under construction. The first recommendation of the report was to take full advantage of these upgraded and upcoming facilities.

Neutrinoless double beta decay experiments, the second recommendation in the report, search for a hypothetical type of radioactive decay in which two electrons are emitted without any accompanying antineutrinos. Discovery of such a process would indicate that the neutrino is its own antiparticle. Several current-generation experiments are preparing for the search, and hope to demonstrate technology that could be scaled up to a next-generation, ton-scale experiment of the type endorsed by the report, which would have a greater chance of detecting the elusive decay if it occurs.

The plan's third proposition — an electron ion collider — would be a high-energy, high-luminosity machine that collides a beam of polarized electrons with polarized protons and ions. Construction of the collider would begin following the completion of construction on FRIB, and could be operational beginning around the end of the 2020s. The collider would allow researchers to uncover the source of the neutron spin and reach the next frontier of quantum chromodynamics, systematically studying the properties of gluons.

The fourth recommendation, to increase funding for small- and mid-scale projects, follows a period with decreased investment in such efforts, as a result of intense focus on large undertakings like FRIB, said NSAC chair Donald Geesaman, a physicist at Argonne National Lab. Now, "we have to have projects at a number of scales," he said in a presentation at the meeting.

The plan passed easily, without any significant critique or questions from the committee or the audience, and the vote was unanimous, an indication of what Geesaman described as broad engagement from the nuclear physics community. Difficult decisions had already been worked out in the committee, said Geesaman, leading to "a lot of consensus" on the most important priorities. To produce the report, NSAC created a dedicated working group that held a series of town meetings and produced white papers. "The key thing, in my mind, is actually going through real budget scenarios," he added.

The plan was well received by DOE and NSF officials, as well. "I think it’s an outstanding plan. I think it builds on the past and looks toward a very vigorous future," said Patricia Dehmer, acting director of DOE's Office of Science, in a presentation at the meeting. Fleming Crim, assistant director of NSF's Directorate of Mathematical and Physical Sciences, commended nuclear scientists for coming together to set goals. "Plans like this are successful when they really engage the community," he said.