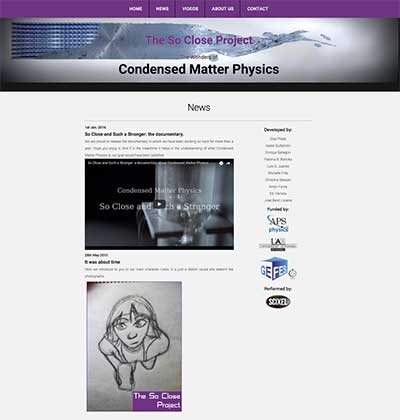 Seeking to show that important advances come from “little questions that lead to big answers,” winners of a 2014 APS Public Outreach Grant have released a YouTube documentary showing the importance of condensed matter physics in everyday life. The video, “Condensed Matter Physics: So Close and Such a Stranger,” was directed by Elsa Prada, Isabel Guillamón, and Enrique Sahagún from the Faculty of Sciences at the Universidad Autonoma de Madrid in Spain.

APS began awarding Outreach Mini-Grants in 2010 to foster clever and creative ways to explain physics to the public. Each fall, the APS Outreach program sends out a call for proposals, which are evaluated the following February by the society’s Committee on Informing the Public. Successful applicants receive up to $10,000 to support their projects.

For more on the APS outreach programs and a list of all grant winners, visit these sites:

The researchers who produced the video have also formed an outreach program:

The So Close Project