On July 2016, a group of 30 Palestinian master’s degree students traveled to the Arab-American University in Jenin to participate in a historic event (APS News, October 2016). The first Palestine Advanced Physics School, organized by an international group of scientists (Scientists for Palestine), brought researchers together with students in the Palestinian territories to learn about advanced physics research from around the world.

The organizers all agreed that this event should be more than a one-time opportunity and should provide a major long-term positive effect for the students involved.

"We are now in the process of organizing a second, more ambitious school (PAPS 2017) at Al-Quds University in Jerusalem," writes Mario Martone, a co-founder of Scientists for Palestine, in a letter to APS News. "As usual, raising funds for this type of event is quite hard. That’s why we have decided to start our own fundraising effort."

According to Martone, Scientists for Palestine’s campaign has reached over 50 percent of its $7500 goal, with just over a month left to accept donations.

"Things are going quite well, and we are well on our way to reach our goal," continues Martone. "[We are] actively pursuing collaborations with a number of possible partners, but we need help to make PAPS 2017 happen, and to become a great success."

In seeking funding for both students and lecturers, Scientists for Palestine hopes to accommodate as many participants as possible. The group plans to host lectures given by leading scientists in condensed matter physics and cosmology, and to provide collaborative problem solving sessions, discussion groups, and social events for the students.

More information about Scientists for Palestine can be found at their homepage. 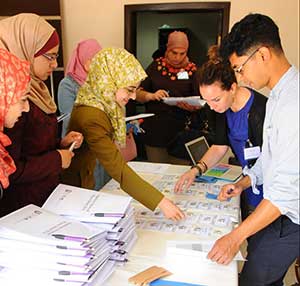