Physicists Converge on the Perimeter Institute

Over the week of June 20-26, hundreds of physicists joined forces to foster revolutionary new ideas in fundamental physics. 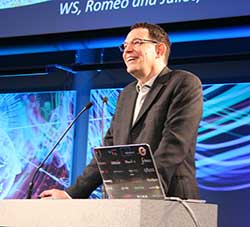 Convergence, a meeting hosted by the Perimeter Institute for Theoretical Physics in Waterloo, Canada, brought physicists together across disciplines for frank discussions of the current state of physics and possibilities for the future.

“We are at an ideal point in time to produce major advances in our understanding of the universe,” said Luis Lehner, co-organizer of the conference and faculty member at the Perimeter Institute. “It seemed like the right time to get together fields from all across the spectrum of physics.” The meeting, Lehner says, took a critical look at the best opportunities for making an impact, particularly for younger generations of physicists.

But the conference wasn’t limited to lectures — roundtable discussions to exchange ideas played an important role. Attendees submitted discussion questions, and after a vote, small groups tackled the most compelling issues.

For the public, historical talks covered the centennials of two revolutionary ideas in physics: Einstein’s theory of general relativity and Noether’s theorem. During the meeting, the institute also announced an additional $4 million in funding from business and philanthropic partners.

Thanks to a strong web presence, researchers from across the globe could connect with the conference. Perimeter hosted live webcasts for all of the talks, and the twitter hashtag #piCONVERGE buzzed with discussion throughout. The entire set of talks is available online.