Since its inception in 2001, the Physics Teacher Coalition (PhysTEC) has provided training and recognition for the small number of physics bachelor graduates that pursue a career in the classroom. A collaboration between APS and the American Association of Physics Teachers (AAPT), PhysTEC supports over 300 domestic and international institutions that are dedicated to improving and promoting physics teacher education.

The 2017 National PhysTEC Teacher of the Year award was given to Alexandra Boyd. Boyd graduated from Elon University with a Bachelor of Arts in Physics and Secondary Science Education in 2012, and dove straight into teaching physics at Holly Springs High School in Holly Springs, North Carolina. Approaching her 5th year of teaching at Holly Springs, Boyd has racked up 7 sections of physics classes per year, and became the school’s Science Department Chair in 2014, where she works with administration to develop her school’s science courses.

"Being recognized for my work in the classroom with this award is encouraging for me as a still relatively new teacher," Boyd told APS News. "I knew I'd spend a lot of time planning, because physics is a really engaging topic. In order to inspire students to choose to learn, or continue to learn about physics, you need to make sure you have to put in the time."

Boyd’s work at Holly Springs not only advanced her own career, but the students’ interests in the physical sciences. The school’s total AP Physics class enrollment increased from 1 to 3 sections during her time at Holly Springs, as well as an increased female enrollment in her courses, from 20% to 50% according to the PhysTEC selection committee.

"The biggest challenge I see in my classroom is a student thinking they can't do physics," Boyd continues. "I see a lot of students give up the first time they hit a roadblock…. [but] I try to make the content relevant and engaging for them. If they're working on something that interests them, they're more likely to continue trying even if they are making mistakes… That's where the real learning happens—when they persevere through difficult content."

Some of her courses include unique activities, including "Woman Crush Wednesday," where her students learn about different female physicists. She also advises the Science Olympiad and the Science National Honor Society on where to spark physics learning outside of the classroom.

Granted funding to attend and be recognized at the PhysTEC 2017 Conference (February 17-18 in Atlanta, Georgia) and the AAPT 2017 Summer Meeting (July 22-26 in Cincinnati, Ohio), Boyd helped establish her home institution as a producer of excellent physics teaching graduates, which she knew was the main driver of her personal success. "Without the Elon Physics and Education Departments, I would not have been nearly as prepared for this career as I am… this award is truly a testament to all of the help and encouragement I received as an undergraduate student, and [it] means the world to me!"

Beyond recognition and travel opportunities, the National PhysTEC Teacher of the Year also receives a classroom materials grant of $1000.

"I haven't decided what I'm going to use it for, because there are so many cool physics contraptions I could purchase to help my students," Boyd confesses. "I may spend it on demos... [but] I always loved using the ‘frictionless’ Vernier tracks that we'd use in physics classes at Elon, so I may start making those a priority!"

Learn more about the PhysTEC Teacher of the Year Award. 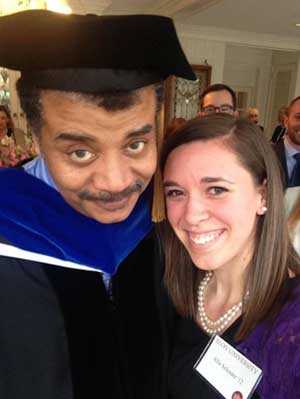