An APS-coordinated petition stressing the negative impact that the U.S. House of Representatives PROSPER Act would have on student loan debt has received a positive response from congressional offices in Tennessee and Washington. About 1,300 students and members of the science community signed the document.

Kate Baumgartner and Shua Sanchez delivered the PROSPER petition to the office of U.S. Sen. Patty Murray in Washington state. 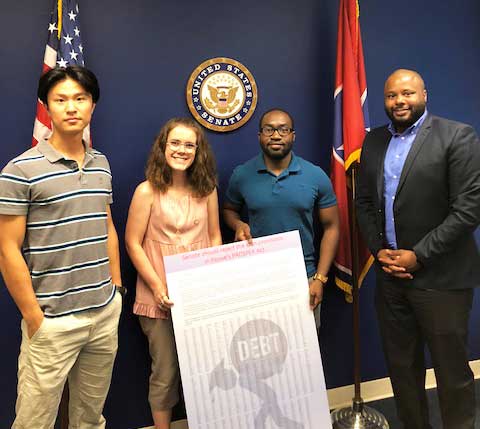 Shua Sanchez, a physics Ph.D. student at the University of Washington, delivered the petition to U.S. Sen. Patty Murray’s office.

“The staffer was sympathetic and supportive,” concerning the detrimental effect that PROSPER would have on the lives of undergraduate and graduate students, said Sanchez.

“The Promoting Real Opportunity, Success and Prosperity through Education Reform (PROSPER) Act would create more anxiety and limit opportunities for students by decreasing the quality and accessibility of student loans, which are vital in this era of high tuition costs,” wrote Sanchez in an op-ed that he developed with support from the APS Office of Government Affairs.

“Thank you for listening to us and making us feel heard,” Starko wrote in a thank-you note to the staffer. “In my mind, those are two very different things, and making somebody feel heard is a lost art. You, though, have mastered that art.”

Senators Alexander and Murray were the focus of the petition since the Senate still has yet to write its version of the bill.

Read more about the PROSPER petition in the July 2018 APS News.