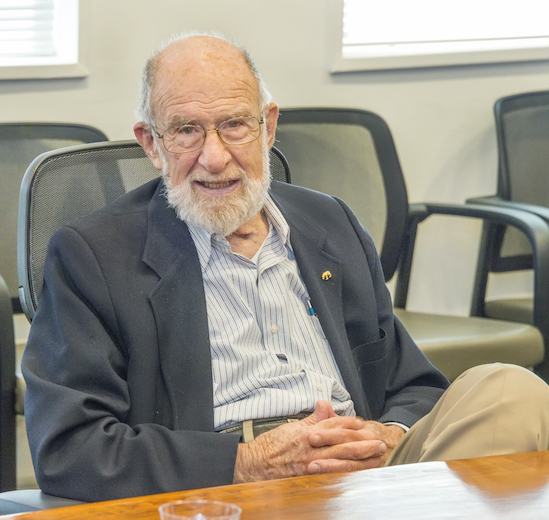 Former director of Lawrence Berkeley National Laboratory and former APS president Andrew Sessler received one of the nation’s top science awards on February 3, 2014. Secretary of Energy Ernest Moniz presented the Enrico Fermi Award to Sessler for his “excellence in research in energy science and technology.”

Sessler started as a working on accelerator physics in the early post-war years at Lawrence Berkeley National Lab. When the Atomic Energy Commission became the Department of Energy in the 1970s, he helped guide the lab’s new focus on energy research.

“Andy has made outstanding and very well known contributions to the establishment of beam physics that underpin many of the discovery tools we host today in many of our national laboratories,” Moniz said. He added that Sessler’s work on synchrotron light sources and high-intensity free-electron lasers helped lay the foundations for LBL’s Advanced Light Source, and SLAC’s Linac Coherent Light Source.

In addition Moniz praised Sessler’s extensive humanitarian work. In the 1970s he founded Scientists for Sakharov, Orlov, and Sharansky, which championed the cause of the persecuted dissident scientists. The group organized an academic boycott of the Soviet Union and helped to fly their families to the United States. “I am pleased that my contributions have been formally recognized and appreciated,” Sessler said. “It shows to the world and the general public that it’s not only movie stars and athletic heroes that are recognized and appreciated. It gives young scientists an understanding that their work is valued and even rewarded.”

Sessler was director of Lawrence Berkley National Lab from 1973 through 1980. He was president of the American Physical Society in 1998.

Also honored with the Fermi award was Allen Bard of the University of Texas at Austin, who is commonly referred to as “the father of electrochemistry.”