Nobel laureate and co-inventor of the laser, Charles Townes of the University of California Berkeley, passed away on Tuesday, January 27, at the age of 99. 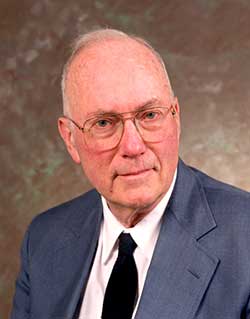 He served on numerous high-level government advisory panels and developed ways to use lasers in astronomy. A dedicated researcher to the end, Townes continued to work at his campus office or at the school’s Space Sciences Laboratory until just months before his death.

“Charlie Townes had an enormous impact on physics and society in general,” Steven Boggs, professor and chair of the UC Berkeley department of physics said in a statement. “Our department and all of UC Berkeley benefited from his wisdom and vision for nearly half a century. His overwhelming dedication to science and personal commitment to remaining active in research was inspirational to all of us.”

Townes’ greatest contribution to physics was inventing a working maser, the microwave precursor of the laser, and developing the theories that would lead to devices generating collimated coherent photons in the visible spectrum.

“Charlie was not only incomparably smart, he was a fine human being,” said William Phillips, physicist at NIST who won the 1997 Nobel Prize for trapping atoms with lasers. “He was a great example of the important legacy to which we in the field of AMO physics are heirs: a scientist whose influential accomplishments are complemented by a spirit of generosity, humility, and openness.”

Soon after graduating he joined Bell Laboratories where he helped develop radar systems during World War II. In 1948 he accepted a faculty position at Columbia University as well. Briefly in 1961 he accepted a position at the Institute for Defense Analyses, before going on to accept a position as provost at MIT.

While sitting on a park bench in Washington, D.C. in 1951, he came up with a technique for creating a pure burst of microwaves using a resonant cavity to stimulate molecules to emit a coherent beam. Townes and his students at Columbia University built a working prototype maser based on ammonia molecules in 1954.

Arthur Schawlow, his colleague at Bell Labs at the time, built on Townes’ work on optical light. They published a paper in 1958 describing an “optical maser,” which would later become known as the laser (Physical Review 112, 1940). In 1960, Theodore Maiman at Hughes Research Laboratories demonstrated the first visible-wavelength laser based on synthetic ruby materials. Though at first mocked as “a solution looking for a problem,” lasers today have found a wide range of uses in commercial products and, industrial manufacturing, and scientific research.

Townes shared the 1964 Physics Nobel prize for developing the maser, along with Nicolay Basov and Aleksander Prokhorov who developed the device independently in Russia.

In 1967, he became a professor-at-large at the University of California, Berkeley, where he remained for the rest of his career. Shortly after arriving at Berkeley, Townes’ interests started moving towards astronomy. He helped develop short-wave radio telescopes there and microwave spectrometers to hunt for complex molecules in space. He was the first to discover ammonia and water vapor near the center of our galaxy. He also helped develop a number of other tools and techniques for studying space in the infrared spectrum.

In addition to his devotion to science, he was also fascinated by the intersection of religion and science. In his 1966 article, “The Convergence of Science and Religion,” he speculated about ways that science and religion could interact and enlighten each other. He received the Templeton prize in 2005 for his work.

This Month in Physics History: December 1958: Invention of the Laser - APS News, December 2003