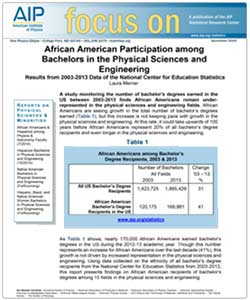 African Americans are underrepresented in the physical sciences, and the gap shows no hint of closing, according to a new report from the American Institute of Physics Statistical Research Center. The study, based on data from the U.S. Department of Education, looked at the number of bachelor's degrees earned between 2003 and 2013. Although the number of degrees African Americans earned in the physical sciences increased by 39 percent over that time period, the increase was outpaced by the 53 percent overall growth in physical sciences degrees.