Gravitational Waves Caught in the Act 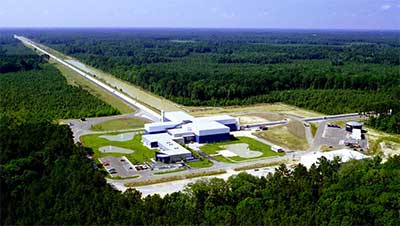 The LIGO Laboratory operates two detector sites, one near Hanford in eastern Washington, and another near Livingston, Louisiana. This photo shows the Livingston detector site. The detector arm stretching off in the distance is 4 km long. 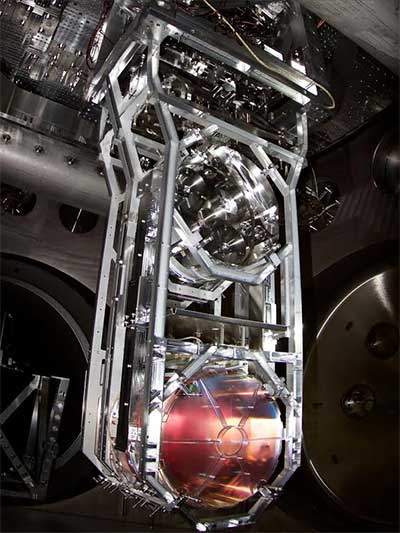 The photo shows one of LIGO's mirrors, which reflect the laser beams along the lengths of the detector arms. The 40 kg mirror is suspended below the metal mass above by 4 silica glass fibers.

In the culmination of a decades-long quest, physicists have directly detected the minuscule ripples in space-time known as gravitational waves. Predicted one hundred years ago as part of Einstein's general theory of relativity, gravitational waves stretch and squeeze space itself. Such waves are generated by some of the most violent cataclysms in the universe, like the exploding stars known as supernovae, or pairs of neutron stars or black holes coalescing into one.

Now, in a paper published in Physical Review Letters on February 11, the Laser Interferometer Gravitational-Wave Observatory (LIGO) and Virgo collaborations announce the detection of just such a black hole merger — knocking out two scientific firsts at once: the first direct detection of gravitational waves and the first observation of the merger of so-called binary black holes. The detection heralds a new era of astronomy — using gravitational waves to “listen in” on the universe.

That observation has left scientists stunned. "My jaw dropped," says Emanuele Berti of the University of Mississippi, who was not involved in the experiment. "The significance of the detection is so high that it's extremely unlikely that this is not a binary black hole signal... Never would I have thought in my life that I would see a signal that clear so early."

"I’m totally beside myself," says Clifford Will of the University of Florida, Gainesville, who was not involved in the experiment. "It’s tremendously exciting. I actually was shown the paper a couple of weeks ago, and I’m still excited two weeks later."

Each LIGO observatory boasts two 4-kilometer long arms arranged in an L. Both arms are outfitted with optical cavities in which laser light bounces back and forth. In the absence of gravitational waves, the light travels the same distance along each arm, and the beams from the two arms interfere when they meet at the arms' intersection, so that no light reaches a detector that monitors the beam.

But when a gravitational wave passes through the observatory, it will ever so slightly lengthen one arm and shorten the other, preventing the full cancellation of the two beams, letting light through to the detector, and producing a signal. LIGO is designed to catch length differences a billionth the size of an atom.

LIGO's two separate observatories help to rule out spurious signals from the local environment, which can be caused by events as innocuous as a truck rumbling by, or ocean waves crashing on the shore. Gravitational wave signals should appear in both detectors, nearly simultaneously.

And that is just what happened. Both observatories recorded a signal consistent with predictions for a black hole merger. In such an event, two black holes rapidly spiral closer and closer together, until they meet to form a single black hole, which then undergoes "ringdown" — in analogy to a bell ringing after being struck with a hammer — until the distorted black hole returns to a normal state. The process produces a telltale "chirp" signal of increasing frequency. That is exactly what LIGO saw, and scientists are extremely confident that it is the real deal: they expect an event like this to appear as a false alarm only once every 203,000 years.

"It was amazing; this was a gift of nature. It was not just black holes but it was a signal we could see by eye," LIGO spokesperson Gabriela González of Louisiana State University said at a press conference in Washington DC on February 11, noting that the signal was strong enough to stick out obviously above the noise.

Some LIGO collaborators say the signal initially struck them as too good to be true. And since LIGO's process includes "blind injections" — test signals planted in the data that only a few collaboration members know about — it well could have been. "I thought it had to be an injection; it was so beautiful," says John Veitch of the University of Birmingham. But collaboration leaders quickly confirmed that it was not a drill.

"There’s really no doubt that this is a real detection, a real signal," says Will. "They do a very careful job of worrying about any kind of issues that might have fooled them."

The discovery of the system and the merger is significant in itself, affirming the power of gravitational waves to unlock new secrets of the cosmos. The result shows that binary black holes can form and merge — something predicted but never before seen.

"The motivation wasn’t just to detect gravitational waves and go home, but the potential to create a completely new science," says Barry Barish of Caltech, a member of the LIGO collaboration and 2011 APS president. "This is a completely different way to look at the sky."

The researchers also set a bound on the mass of the graviton — the hypothetical particle that transmits the gravitational interaction — and put general relativity through its paces by performing consistency tests, which it passed handily.

LIGO detected a second, less significant event, which was also compatible with a binary black hole merger.  But, "my feeling is that it’s not part of the story," says Barish. "It doesn’t measure to be statistically probable enough that we should talk about it." The false alarm rate for an event like this is once every 2.3 years.

The discovery came on the heels of a $200-million upgrade to the experiment, called Advanced LIGO, intended to boost its chances of finding the elusive signals. During LIGO's previous run, from 2002 to 2010, the collaboration came up empty-handed. Currently, the detector's sensitivity to binary neutron star mergers is improved over its previous incarnation by a factor of three to five, says Barish. Eventually, the sensitivity will reach a factor of ten improvement — increasing the rate of binary neutron star mergers LIGO can detect by a factor of 1000, by effectively allowing LIGO to peer further out in space.

Several planned gravitational wave observatories, including Advanced Virgo in Italy, will soon form a network of detectors along with LIGO, allowing physicists to more accurately pinpoint sources on the sky, and point telescopes in the direction of candidates to look for corresponding electromagnetic signals. "We can start seeing the universe and listening to it at the same time," says Chiara Mingarelli of Caltech.

Although the result is the first direct detection of gravitational waves, physicists have long been confident in their existence, persuaded by indirect evidence gleaned from pulsars, or rapidly rotating neutron stars that appear to pulse regularly. By examining variations in the timing of signals coming from a pulsar locked in an orbit with another star, scientists showed that the system was losing energy in the form of gravitational waves. The 1974 discovery of this binary pulsar earned its discoverers, Russell Hulse and Joseph Taylor, the 1993 Nobel Prize in physics. For years, physicists have speculated that the first direct detection of gravitational waves will be Nobel-worthy too.

With the paper covering only a few weeks of operation, and months more of data already in the can, it might not take long for new signals to appear. "They'll find more stuff," says Virginia Trimble of the University of California, Irvine. "That's the next rumor, of course, is events two and three."

There's plenty to come from LIGO, said Kip Thorne of Caltech said during the press conference. "It’s really fantastic; we are going to have a huge richness of gravitational wave signals." As for what the new data will bring, "I think we can be rather sure that we will see big surprises," he said.

For more on the discovery read the Physics Viewpoint by Emanuele Berti.