Thanks to a donation from entrepreneur Jay Jones, the new prize recognizes achievement in physics across all disciplines 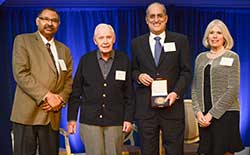 On January 28, APS awarded its first Medal for Exceptional Achievement in Research to Edward Witten (center right), Institute for Advanced Study, Princeton. The award was funded by a donation from Jay Jones (center left) and was presented by 2016 APS President Homer Neal (left) and CEO Kate Kirby (right).

For the first time, APS has recognized the remarkable achievements of a single scientist — selected from across the entire field of physics — with the 2016 APS Medal for Exceptional Achievement in Research. In a ceremony held January 28 in Washington, DC, the inaugural recipient, string theorist Edward Witten of the Institute for Advanced Study, received the prize.

The annual APS Medal is intended to “recognize contributions of the highest level that advance our knowledge and understanding of the physical universe in all its facets,” and “to celebrate the human value of open and free inquiry in the pursuit of knowledge.” The physicist chosen for this honor receives a medal and an award of $50,000 — making it the largest prize given by APS.

The award was established thanks to a donation from entrepreneur Jay Jones, the founder and former president of Olympic Medical Corporation.

“It is truly a wonderful occasion,” said 2014 APS President Malcolm Beasley, speaking at the ceremony. “The APS can finally recognize those among us who have made the most important contributions across the entire field of physics. That was not possible before.”

Witten received the award for “discoveries in the mathematical structure of quantum field theory that have opened new paths in all areas of quantum physics.” Witten is the originator of M‐theory, which united five competing string theory models. This result kicked off intense interest and rapid developments in the field, leading to a boom known as the second superstring revolution.

In remarks during the ceremony, Jones said, “I don't think your committees could have selected a more deserving or distinguished physicist, and I also think it's an extremely auspicious beginning for an annual award for APS.”