Experience the 1987 "Woodstock of Physics" Online 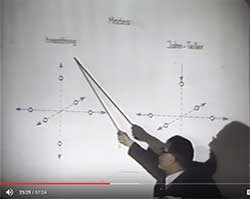 In the run-up to the APS March Meeting 2016, physicists can now relive one of the meeting's all-time highlights, known informally as the "Woodstock of Physics." The event, which highlighted rapid developments in high temperature superconductivity research, took place at the 1987 APS March Meeting in New York, beginning the evening of March 18 and continuing late into the night. APS recently posted video of the talks online.

The session followed the 1986 discovery of superconductivity in ceramic materials by Georg Bednorz and Karl Alex Müller, which would earn its discoverers the Nobel Prize in 1987. Their findings ignited a flurry of activity in the field, including the discovery, from a team led by Paul Chu of the University of Houston, of superconductivity in yttrium barium copper oxide above the boiling point of liquid nitrogen — a major technological breakthrough. The result was published in Physical Review Letters in early March, shortly before the meeting.

Many other research groups had likewise joined in the study of high temperature superconductors, and the session consisted of a marathon of talks, given by about 50 speakers, and lasting until after 3 AM.