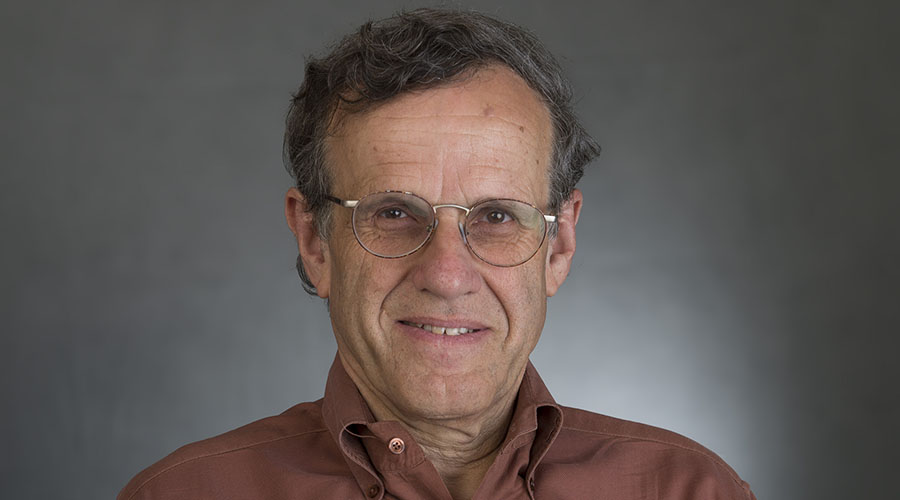 How could nuclear power help humanity in a warming climate? How can physicists better explain their work to the public? And why are magnetic fields… well, everywhere? “The nerve of them, being so ubiquitous,” he says.

Rosner is an eminent theoretical physicist and the 2023 APS President, and his love for the field stretches back to childhood. “I loved puzzles; I always read science articles, books,” he says. He earned his bachelor’s degree in physics from Brandeis and his doctorate from Harvard and has been at the University of Chicago since 1987.

Rosner’s research focuses on fluid dynamics, plasma physics, and computational physics, but energy issues — both science and policy — loom large, too. “Why do I care? That’s simple: climate change,” he says. Rosner spoke with APS News about his background and the challenges and opportunities that lie ahead for APS and physics. This interview has been edited for brevity and clarity.

What first got you into physics?

I don't remember a time when I didn't love science. When I was a kid in Germany, I had a subscription to this monthly magazine called Kosmos — it covered all sciences, and I loved it. I would get their science kits; I built stuff all the time.

When I came to the States, at 12, I continued that — devouring science magazines, building stuff. In high school, I took regular physics, AP physics; I took regular math, calculus, advanced math. I loved it all.

Brandeis was a relatively young school, but it had a fantastic physics faculty and a small cohort of physics majors. It was an amazing experience for me; the die was cast.

But I also learned that I was not cut out to be an experimentalist. I was a danger in the lab. Once, I was working in a lab as an undergrad, and I was wiring this instrument — a big metal chassis, maybe three feet by two feet. I had it propped up in front of me on the bench. I was soldering some junctions, but I was klutzy, and the whole thing fell toward me. It was heavy — 60 or 70 pounds. I couldn't get my hand out of the way fast enough. The chassis pushed the soldering gun into my cheek.

Did it leave a scar?

I had a scar for years. I branded myself.

How did your interests evolve in graduate school?

At Harvard, I discovered what I really liked to do. As a theorist, though, they’d make you take a course to show you what experiments were about. I viewed that as punishment. So I picked a project with an experimentalist named Paul Horowitz, who was working northwest of Cambridge, at an observatory with an optical telescope, looking at the Crab pulsar.

In January, I drove out there in my Volkswagen bug. My job was to go up to the prime focus of this telescope, outside, where the photomultiplier detector was. Paul would say on the intercom, “Bob, can you wiggle the wire?” It was 1:00am, minus 20 degrees. I thought, “Now I know for damn sure: I’m never, ever in this business.”

Theory, yes! After that, I got interested in fluid dynamics and plasma physics.

At the University of Chicago, I continued doing astrophysics but also returned to just the physics part. My physics was divided between fluid dynamics and plasma physics related to terrestrial laboratories, and the same physics, but applied to astronomy.

Let’s turn to a big challenge facing physics — public skepticism of science. What role do you think physicists have in tackling this?

Historically, physicists played a big role in public policy; witness what happened during World War II or the Cold War. While I think the physics community continues to be an invaluable source of expertise, there's been a long-term trend toward skepticism of expertise in general — not just science. Particularly worrisome is the potential partisan nature of this skepticism.

How all that’s dealt with best is, itself, a research question. And we as physicists have to do more to engage with folks who have thought deeply about this problem.

We have to play a bigger role in training ourselves to speak to the public. And we have to support folks in all science fields that have something to say about policy. This is a tall order. But APS has a project already ongoing in this direction, the Science Trust Project. I want to strongly support that.

And APS is a member organization. Our members are real people. So I think we can drive this process of engaging the public in a way that hasn’t been done before.

In a 2020 UChicago News article, you expressed concern about physics’ lack of diversity. Only 20% of physics doctoral degrees go to women; only 6% go to Black, Indigenous, and Hispanic people. Why and how should APS work to improve this?

One reason is the health of the discipline itself. To do physics well, you need to be smart, and being smart doesn't depend on sex or race or ethnic background. There are smart people everywhere, and we need to attract them; if we push people away, that's a detriment to the field. We are poorer for not engaging everyone.

There are initiatives that my predecessors put in place — Jim Gates’ initiative, DELTA-PHY, for example — that I want to push forward. One of the things I've discussed with him is whether we can form closer relations with physics societies whose members may not have felt represented within APS. We need to figure out how APS and these societies can help each other. If it's not a win for all sides, it's dead on arrival.

We have this incredible transition to open access journals; we have to weather that well. We’re also looking at our organization itself: There's a task force on committees, led by Peter Schiffer, that will address how we should operate in a more efficient, effective way.

And we’re going to build stronger relations with our sister science societies, like AAAS and AIP, and the societies that are members of AIP. This goes to the heart of how we, as science societies, are looked at by the public, including the political world.

What questions in physics are you excited about?

My own hobby horse — the question I’m interested in — is, where the heck are cosmic magnetic fields from? Why are they so ubiquitous? Have they existed right from the Big Bang, before photons decoupled from matter, or only afterwards? Why do all these galaxies and stars have magnetic fields? I’ve pondered that for many years.

You’re also quite involved in energy policy. What interests you in this space?

Climate change is driving us to change our energy systems, and the question is how to do that in a way that works not just technically, but economically. One hundred years from now, what will things be like? We could be building new kinds of nuclear fission reactors, safer ones, and dealing effectively with nuclear waste; perhaps we might even manage controlled fusion on an industrial scale, building fusion power reactors. Can nuclear power compete economically with wind and solar power coupled to grid-scale storage?

We don't know, and that means we have to explore everything. During these next few decades, we're going to find out the answers to these questions. And then we have to act — we have to go for it.

Taryn MacKinney is the Editor of APS News.