Graphene is a layer of carbon atoms one atom thick. These densely packed carbon atoms form a honeycomb lattice. A key signature of graphene is the Dirac cone, the distinctive shape seen when plotting its energy versus momentum for electrons.

Daniel Torrent and José Sánchez-Dehesa of the Polytechnic University of Valencia, Spain, drilled hexagonal holes in sheets of plexiglass in a honeycomb pattern like graphene's. When the plexiglass was connected to a loudspeaker, bursts of sound were sent across the plastic and recorded by two suspended microphones. When the captured sound waves were plotted, calculations based on their differences formed a graph similar to a Dirac cone structure. These plots seem to confirm that sound waves mimic the electronic band structure of graphene. 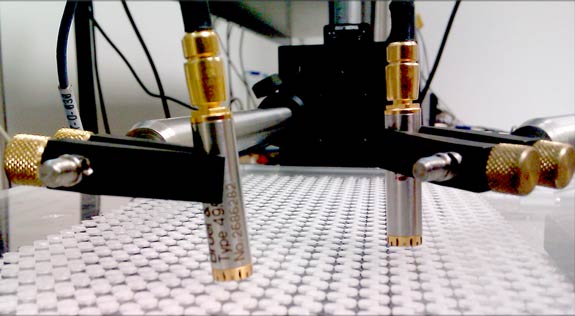 Image Credit: Daniel Torrent/Polytechnic University of Valencia, Spain
This image shows the honeycomb pattern of the plexiglass, the loudspeaker in the background, and the microphones that recorded the sound wave behaviors. Using a macro-scale material like plexiglass allows researchers to easily and cheaply simulate and predict graphene responses.

Work supported by the Spanish Ministry of Science and Innovation (MICINN), CONSOLIDER Program.