Michael Snyder and others have explored ways to visualize magnetic fields in the lab. The visualization here started with a Hele-Shaw cell. A Hele-Shaw cell is two flat parallel plates separated by a nearly infinitesimal distance. In this case, Snyder's and Frederick's Hele-Shaw cell is made of two 100mm circular glass windows separated by a Fe3O4 ferrofluid; that is, a liquid of 10nm particles that becomes strongly magnetized.

The Hele-Shaw cell is facing the camera and illuminated by 36 colored LED lights placed around the cell’s perimeter. The light is scattered through the cell as the ferrofluid particles respond to two magnets behind the cell which are aligned north/south and south/north. The magnetization produces this anti-vortex image. 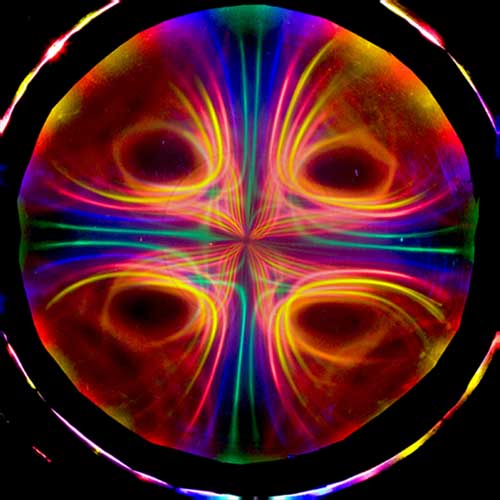 Currently Michael Snyder is a graduate student in the University of Louisville’s PhD program. He and his advisor, Dr. P. J. Ouseph, are currently working on how images like these form.