The Smallest Particle of Ice 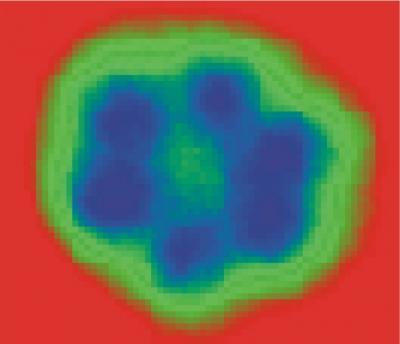 Collaborative research between scientists in the UK and Germany (published in Nature Materials) has led to a breakthrough in the understanding of the formation of ice. Dr Angelos Michaelides of the London Centre for Nanotechnology (formerly of the Fritz-Haber Institut der Max-Planck Gesellschaft in Berlin) and Professor Karina Morgenstern of the Leibniz University Hannover have combined experimental observations with theoretical modelling to reveal with unprecedented resolution the structures of the smallest pieces of ice that form on hydrophobic metal surfaces.

The results provide information about the process of ice nucleation at a molecular level and take science a significant step closer to understanding the mysterious process through which ice forms around microscopic dust particles in the upper atmosphere. Because this is the basis of cloud formation, knowing how different particles promote ice formation is crucial for climate change models.

The authors began by cooling down a metallic surface to 5 degrees above absolute zero (around –268 Celsius) at which temperature it was possible to “trap” and obtain images of the smallest possible pieces (hexamers) of ice using a scanning tunnelling microscope (STM). The hexamer — the simplest and most basic “snow flake” — is composed of just six water molecules. Other ice nanoclusters containing seven, eight and nine molecules were also imaged.

On the difficulties of imaging these ice clusters, Prof Morgenstern said: “Scientists have long struggled to resolve single water molecules within ice clusters, because they are so vulnerable to damage induced by electrons — the very thing that creates the image. The high resolution could only be achieved by reducing the current to the smallest value technically possible.”

As well as performing experiments, the team used highly-accurate (‘first principles’) theoretical models to analyse how such a structure could form. Here the theory provided some surprising insights. In ice, water molecules usually bond to each other with equal strength but with the ice nanoclusters the team identified a pattern of alternating shorter and longer bonds between the water molecules. This pattern provided new information about the ability of water molecules to share their hydrogen bonds, revealing a hitherto unknown competition between the ability of water molecules to bind to a metal surface and simultaneously accept hydrogen bonds.

Dr Michaelides said, “We are all familiar with the freezing of water. It features prominently in our daily lives, from fridge freezers to winter snow. Despite all this, the question of how individual water molecules come together and give birth to ice crystals remains mysterious. Our research provides an insight into the most important and ubiquitous type of ice nucleation event, namely heterogeneous nucleation. State-of-the-art experimental and theoretical techniques allowed us to “watch” and accurately model what happens at very low temperatures.”

The research makes it possible to explain the ways in which water structures form on different substrates, such as transition metals and salt surfaces. It may also provide a new way of thinking about the structure of ice clusters that form on solid surfaces in general, opening the door for applications in a variety of fields as diverse as astronomy, electrochemistry, and energy research. It also takes us a step closer to understanding how water interacts with different aerosols and dust particles in the atmosphere, processes which drive cloud formation and have a large impact on the planet’s climate.