This crown is formed by the splash and droplets of a 2-mm drop of red dye impacting on a thin layer of milk.

A single droplet of red dye was released from a height above a substrate and recorded with high-speed photography. The extremely fast sequence of events following the droplet impact strongly depends on the type of liquid, droplet size, impact velocity, and the substrate. For a substrate covered with a very thin layer of liquid the impact of a droplet results in an upward jet forming a crown – a crown splash. High-speed photography reveals crown formation with tips of entrained milk covering the rim of the coronet. The rim breaks up in a number of satellite droplets determined by the most unstable wavelength of the Rayleigh-Plateau instability.

In the inkjet printing industry, better understanding of the formation of satellites following droplet impact can improve the printing quality. 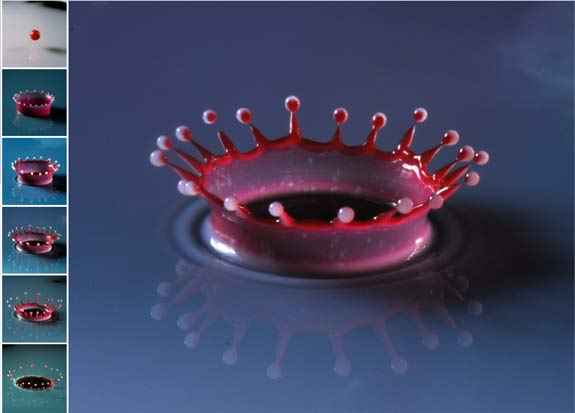 This image was shown at the 61st Annual Meeting of the APS Division of Fluid Dynamics (DFD) November 23-25, 2008 in San Antonio, Texas.