June 5, 2012
Every century or so, Venus glides across the sky, a black shadow moving across the eastern edge of the sun.  Anxious not to miss this once-in-a-life-time event, professional and amateur observers worldwide turned their eyes skyward beginning at 10:00 p.m. GMT, June 5. The "Venus Transit" lasted over six hours.

People in north and central America caught site of Venus before sunset, viewers in east Asia were able to see the entire traverse, while enthusiasts in Europe, the Middle East, and eastern Africa woke at sunrise to see the end of the Venus's passage.

Why Study the Transit?
In the past, astronomers used  "Venus Transits" to calculate our solar system's planetary orbits and distances. Because we have a good understanding of Venus's atmosphere, the transit of 2012 allowed astrophysicists to test methods of analyzing exoplanet atmospheres when they pass in front of their own stars.

What Did Venus Look Like?
Venus looked like a black circle moving across the sun. NASA's Sun-Observing TRACE spacecraft was able to give us a view of the "Venus transit" well beyond what even the fanciest "Eclipse Shades" were able to do.

NASA Videos of the "Venus Transit" 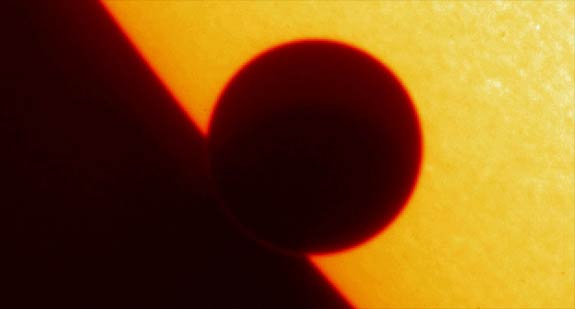 Image Credit: NASA/Solar Dynamics Observatory (SDO) AIA Telescopes This image shows Venus on the eastern side of the sun. Areas where Venus is not completely black are the result of the Sun's light filtering through Venus's scattered atmosphere. The red lines highlighting Venus and the edge of the sun are an effect of the TRACE telescope.

Image Credit: NASA/Solar Dynamics Observatory (SDO) AIA Telescope Venus seems to float across the face of the sun. Since Venus is passing in front of the sun, the light behind it casts a perfectly round shadow.