Physicists use computer simulations and simple bacterial models to capture universal elements of evolutionary dynamics. Physical expansion is key to the growth and prosperity of many populations. Expansion into new spatial and geographical territory is evident in many organisms from viral infections and tumor growth to human and animal migration.

A  team of physicists from Massachusetts sought to understand how territorial expansion affects the survival rate of mutations within a population.

In their simulations, the researchers compared two computational models of population dynamics and explored the differences between the evolving populations that expanded with a linear, flat expansion front and those that expanded with curved front.  The researchers propose that a curved expansion fronts would describe the inland migration after an organism colonizes a coast.

The researchers also developed an experimental model using two Es-cherichia coli (E. coli) strains in a ring pattern on a Petri dish. As imaged below, the strains of E. coli were labeled with green and blue fluorescent proteins, which allowed the researchers to track the population growth and evolutionary dynamics of the competing bacteria strains. 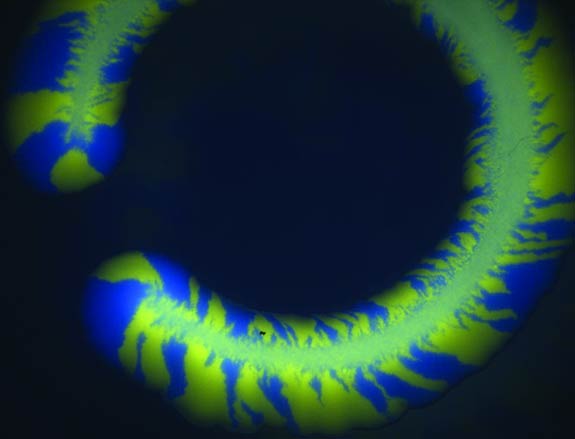