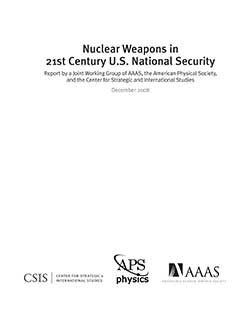 U.S. nuclear policy and strategy in this post-Cold War and post-9/11 security environment have not been well articulated and as a consequence are poorly understood both within and outside American borders. This situation has led to doubts and uncertainties about the roles and missions of nuclear weapons and their value against 21st century security threats, including allies’ uncertainties about U.S. assurances as they relate to emerging nuclear-armed neighboring states.

Lacking a coherent and compelling rationale for U.S. nuclear strategy and policy, Congress has been unwilling to fund some Bush Administration requests for new nuclear refurbishment efforts (both stockpile and infrastructure). Meanwhile, serious strains on the human, technical, and scientific infrastructure could undermine whatever strategy is ultimately adopted. Clearly, this policy vacuum regarding our nuclear deterrent must be addressed alongside our efforts to prevent further nuclear proliferation.

The purpose of this report is to inform the next administration’s decision-making on U.S. nuclear strategy, policy, posture, and related proliferation and arms control issues. Any decision that the United States makes with respect to its own nuclear stockpile and infrastructure must also address how these decisions (and perceptions of those decisions) may affect U.S. efforts to prevent nuclear proliferation and pursue lower global inventories of nuclear weapons. To address 21st century nuclear threats, and growing challenges to sustaining the U.S. nuclear deterrent, the next administration should build a package of nuclear initiatives that can attract broad support both at home and abroad. This study seeks to identify the components of a new centrist way forward to end the post-Cold War drift on U.S. nuclear strategy, policy, and capabilities.

The American Physical Society (APS), the American Association for the Advancement of Science (AAAS), and the Center for Strategic and International Studies (CSIS) collaborated in this study in an effort to bring together the technical expertise of the scientific community and the policy expertise of the security studies community. This collaborative effort was organized around a series of four workshops,1 held in the first half of 2008, that ensured cross-fertilization across disparate disciplines and perspectives without sacrificing issue-specific depth. Despite diverse views about the role of U.S. nuclear weapons and their importance to U.S. security, workshop attendees found they held common, though not necessarily unanimous, views on how the next administration could assemble a package of initiatives that, if taken together, could attract broad support. Throughout this report, these commonly held views will be expressed in bold type. It should be noted, however, that no participant held all of these views and that no single view was held by all attendees.

The interpretations and conclusions contained in this report are those of the authors and do not represent the views of the APS Executive Board, the AAAS Board of Directors, the APS and AAAS Councils and memberships, the John D. and Catherine T. MacArthur Foundation, or the Richard Lounsbery Foundation.