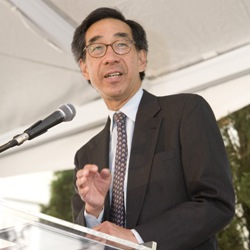 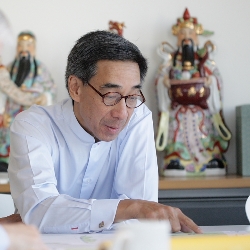 The Journey to Design
Didi didn’t dream of being an architect nor was that his initial interest in college.

While Didi’s father is world-famous architect I.M. Pei and people always ask Didi if he chose architecture because of his father’s fame, Didi often points out that his choice to become an architect came at a time when his father was not so well-known.

When Didi was studying at Harvard, he was a physics major who was looking towards a career in computer technology or science. As he pursued a Bachelors of Arts in physics, he also took some art and architectural history courses. With his background in physics and an interest in art and design, Didi decided to pursue a master’s in architecture.

Design Innovation: The Art in Physics
The ability to create unique designs that are structurally sound yet inspiring is not an easy skill to develop. But, Didi’s approach to architectural design is extraordinary and merges science and art to produce award-winning structures.

Boston’s Museum of Fine Arts, the Grand Louvre in Paris, and the Suzhou Museum are just a few of Didi’s numerous contributions to prominent architectural design. Much of Didi’s designs and contributions can be found all over the world – from America to Europe to China – and in a variety of sectors – from government buildings to luxury living spaces to medical centers.

The Value of Logic
“The logic in science is that you make decisions based on facts – not on what would be nice to do,” says Didi. Studying physics has given Didi a sense of practicality and logic that you don’t usually learn when studying the arts.

“A lot of architects would like you to think that architecture is about being an artist, and that you can do anything. But you have a responsibility as an architect. Generally speaking, it’s not your money and it’s not your schedule, and you don’t have all the time in the world, so having a logical thought process is useful,” says Didi.

A Different Kind of Architect
“I had acquired really rigorous training in the scientific method. There aren’t many architects who had that, and it’s been very useful to me throughout my career,” says Didi. While most architects emerge from art majors or even engineering majors, Didi is one of the few who have had significant training in math and physical science, giving him an edge to evaluating designs and producing timeless works of art in architectural design.

Follow Your Intuition
Even though Didi has the mind of a physicist, he still trusts in something that science can’t explain: intuition. “Intuition is where it’s all at,” says Didi. “Intuition is where all the fun is…”
Get Good Work Experience
Before launching his own firm - Pei Partnership Architects - with his brother, Didi worked in his father’s architectural firm for over twenty years. He credits much of his ability and professionalism to the experience in working in a world-class firm for so many years. By working in his father’s accomplished firm, Didi learned the vital skills and knowledge needed to create revolutionary designs very early in his career when he was just a beginning architect.