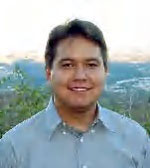 
Daniel Steck, a native of Dayton, Ohio, received his Bachelor's degree in Physics and Mathematics from the University of Dayton in 1995. His first exposure to experimental research was his work with Prof. Perry Yaney at UD on laser diagnostics of turbulent gas flows. He also worked with Prof. T. A. Brian Kennedy for a summer as part of the NSF REU program at Georgia Tech, where his theoretical research addressed limitations to laser cooling due to radiation trapping. Dan then joined the research group of Prof. Mark Raizen in the Department of Physics at The University of Texas at Austin to perform his dissertation research on the dynamics of atoms in time-dependent optical lattices. These experiments included a quantitative study of the quantum--classical transition due to decoherence as well as the first observation of "chaos-assisted tunneling." He was supported as a graduate student by an NSF Graduate Research Fellowship and later by a Hertz Foundation Fellowship. He completed his Ph.D. in 2001. In addition to the 2003 DAMOP Thesis Prize, he was also awarded the 2002 Fannie and John Hertz Foundation Thesis Prize; and the 2002 Council of Graduate Schools/University Microfilms International Distinguished Dissertation Award. He is now a Postdoctoral Fellow at Los Alamos National Laboratory, where he continues to do theoretical research on quantum measurement, quantum control, and Bose-Einstein condensate dynamics.