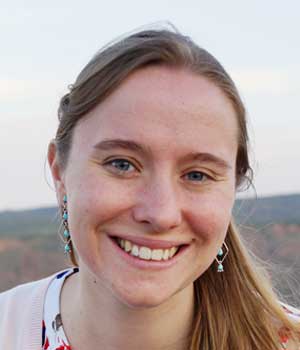 
EliseAnne Koskelo graduated magna cum laude from Pomona College with a B.A. in Physics and Math. Her theses research investigated using noise to enhance the resolution of thermoreflectance imaging. Elise developed an experimentally-validated analytical model of the “stochastic resonance” of this system, and showed that noise can enable an order of magnitude or greater improvement to the thermal resolution, which is otherwise limited by the digital resolution of the CCD imager. This work is published in the special issue Photothermics in Journal of Applied Physics. Elise spent four summers at Los Alamos National Lab where she researched nondestructive evaluation and DFT of 2D materials. She also researched atmospheric modeling as a NOAA Hollings Scholar and molecular spectroscopy at Pomona. Elise is an author on four journal publications and four conference proceedings.

A Churchill Scholar, Elise is pursuing an MPhil in Physics at the University of Cambridge in the Quantum Matter Group. After, she will pursue a PhD in Physics at Harvard University with the support of an NSF Fellowship. Elise is a member of the APS, Phi Beta Kappa, Sigma Xi, and the SPIE. She is a Goldwater Scholar, recipient of the SPIE DJ Lovell Scholarship, and YoungArts Merit Winner in Design Arts for her fiber arts and architectural designs. Elise is dedicated to mentoring, serving as a TA in physics and math and president of the Society of Physics Students and Women in Physics clubs. She is an avid runner.