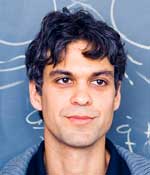 
"For important contributions to the dynamics of plasma in extreme astrophysical environments, and advocating for more Hispanic students to enter astrophysics."


Enrico Ramirez-Ruiz, Ph.D., is a professor and chair of astronomy and astrophysics at the University of California, Santa Cruz. He is also the Niels Bohr Professor at the Niels Bohr Institute. After receiving his Ph.D. from the University of Cambridge (U.K.) in 2003, Dr. Ramirez-Ruiz was the John Bahcall Fellow at the Institute for Advanced Study in Princeton, New Jersey, until 2007. Dr. Ramirez-Ruiz has won a number of awards for his research, including a Packard Fellowship, the National Science Foundation’s CAREER Award, the Kavli Fellowship, and the Radcliffe Fellowship at Harvard University (Cambridge, Mass.). In 2011, Dr. Ramirez-Ruiz became the youngest elected member of the Mexican Academy of Sciences to date. A theoretical astrophysicist, Dr. Ramirez-Ruiz is developing the conceptual framework needed to understand the violent nature of the universe. He uses computer simulations to explore transient phenomena such as mergers and disruptions of stars, especially those involving compact objects. Dr. Ramirez-Ruiz has authored or co-authored around 180 research papers. He has broadcast and written widely on science, and is a highly decorated teacher and research adviser. As the director of the Lamat Summer Research Program on High-Performance Computing in Astrophysics, Dr. Ramirez-Ruiz works vigorously to support the promotion and retention of women and underrepresented minorities in STEM.