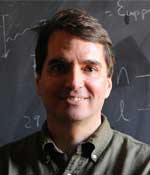 
Francis Robicheaux received his B.A. from the University of Chicago in 1985. He received a Ph.D. from the University of Chicago in 1991 for work in theoretical atomic and molecular physics. From 1990 to 1993, he was a postoctoral fellow at the Joint Institute of Laboratory Astrophysics. Robicheaux joined the physics faculty of Auburn University in 1993 where he is currently a professor. In 2004, he was named an Alumni Professor and, in 2011, he received the Dean's Faculty Research Award from the Auburn University College of Science and Mathematics. He received an NSF Young Investigator's Award in 1994 and was named a Fellow of the American Physical Society in 2002. His research focuses on simulations for the ALPHA collaboration which has successfully trapped the anti-hydrogen atom, on the behavior of highly excited atoms exposed to various strong fields, and on the fully quantum calculation of two and three electron systems.