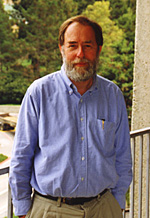 
"For his seminal work on chemical reaction dynamics in liquids and the dynamics of fundamental biological processes using femtosecond laser spectroscopy."

Among his awards are Fellow of the Royal Society, Fellow of the American Academy of Arts and Sciences, the Marlow, Tilden and Centenary Medals from the Royal Society of Chemistry, the Nobel Laureate Signature Award for Graduate Education Chemistry, the Peter Debye Award and the Harrison Howe Award of the American Chemical Society. He has also received Sloan, Dreyfus, and Guggenheim Fellowships as well as the Coblentz Award and the Inter-American Photochemical Society Award.