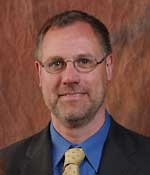 
"For pioneering work in the area of the ultra-fast laser science, including development of ultra-fast optical and coherent soft x-ray sources"


Henry C. Kapteyn has been a Professor of Physics at the University of Colorado at Boulder and a fellow of JILA since 1999. Previously he held faculty positions at Washington State University (1990-1995) and the University of Michigan (1996-1999). He received his BS from Harvey Mudd College in 1982, MS from Princeton in 1984, and a Ph.D. in Physics from the University of California at Berkeley in 1989. He and his wife and long-term collaborator, Margaret Murnane, are well known for research in ultrashort pulse laser science and technology, particularly for pioneering developments making it possible to access new physics in the few-optical-cycle and sub-optical cycle (attosecond) regime of laser matter interactions, and in techniques for upconverting laser light to make coherent beams of x-rays. Prof. Kapteyn has published nearly 200 journal ar-ticles in the field. He previously received the Adolph Lomb Medal of the OSA (1993) and the Ahmed Zewail Award in Ultrafast Science and Technology of the ACS (2009). He is a fellow of the American Physical Society, Optical Society of America, and the American Association for the Advancement of Science.