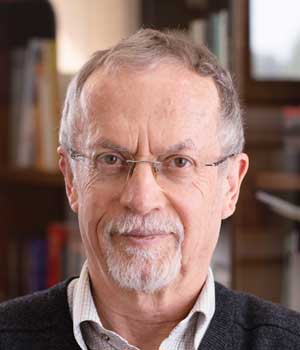 
"For pioneering experiments on diffusion and interfacial structure of polymers."


Jacob Klein is the Herman Mark Professor of Soft Matter Physics at the Weizmann Institute in Israel. Klein gained his BA in Physics at the University of Cambridge, where in 1977 he also received his M.A. and PhD at the Cavendish Laboratory. Since 1977 he has been at the Weizmann Institute in Israel. He first came as a postdoc, and then from 1980-1984 was a Senior Scientist at the Weizmann Institute, as well as a University Demonstrator at the Cavendish Laboratory. In 1984 he was appointed Professor at the Weizmann Institute (full Professor from 1987), and subsequently headed its Polymer Research department and was Chairman of its Scientific Council. Concommitantly, from 2000-2007 Klein was the Dr. Lee’s Professor of Chemistry at the University of Oxford and Head of its Physical and Theoretical Chemistry Department. His interests in soft matter have ranged from the dynamics and interfacial properties of polymers to the behaviour of confined fluids and biological lubrication. Klein has published over 280 papers, including over 25 in Science and Nature. His honours include the Charles Vernon Boys Prize of the Institute of Physics, UK (1984), the High Polymer Physics Prize of the American Physical Society (1995), the 2011 Soft Matter and Biophysical Chemistry Award of the UK Royal Society of Chemistry, the 2012 Tribology Gold Medal (world’s top award in the field), the 2015 David Turnbull Lectureship Award of the Materials Research Society, the 2017 Liquid Matter Prize of the European Physical Society, the 2019 Gold Medal of the Israel Chemical Society and the 2020 Rothschild Prize. In 2009 and 2017, he received prestigious ERC Advanced Grants. He was elected in 2013 to the Academia Europaea and in 2016 to the Israel Academy of Science and Humanities.