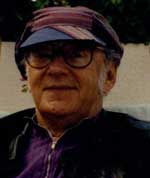 
"For his important contributions to public understanding of the physics of nuclear policy and for his graceful and subtle explanations of modern science in his books and articles over many decades."


Jeremy Bernstein was a professor   emeritus of physics at the Stevens Institute of Technology in Hoboken, New Jersey. He was a staff writer for the New Yorker from 1961 to 1995. He was an adjunct professor at the Rockefeller University and a vice president of the board of trustees of the Aspen Center for Physics of which he is now an honorary trustee. He is also a fellow of the New York Institute for the Humanities. He has held appointments at the Institute for Advanced Study, Brookhaven National Laboratory, CERN, Oxford, the University of Islamabad, and the Ecole Polytechnique. He has written some fifty technical papers and three technical monographs; most recently Kinetic Theory in the Expanding Universe, and An Introduction to Cosmology. In addition, he has written many books on popular science and mountain travel. They include Albert Einstein, which was nominated for a National Book Award, Three Degrees Above Zero, In the Himalayas, Mountain Passages, Science Observed, The Tenth Dimension, Cosmological Constants,  Quantum Profiles,  Cranks, Quarks, and the Cosmos,  Hitler's Uranium Club-a history of the German attempts to build an atomic bomb, A Theory for Everything, Dawning of the Raj and The Merely Personal  and a biography of Robert Oppenheimer entitled, Oppenheimer; Portrait of an Enigma and well as Quantum Leaps.  He has won the AAS -Westinghouse and the U.S. Steel-American Institute of Physics science writing prizes; the latter twice. He has also won the John Case Award of the American Alpine Club for his writing about the mountains, the Brandeis Creative Arts Medal for general non-fiction and the Britannica Award for the dissemination of knowledge. The latter included a lecture on cosmology at the Tribhuvan University in Kathmandu. Most recently he has won the Gemant Award of the American Institute of Physics for contributions that link physics to the arts and humanities, and the Ralph Coats Roe medal of the American Society of Mechanical Engineers for contributions to the public understanding of science and technology, and the Hartley Burr Alexander Award of the University of Nebraska. He has taught non-fiction writing as a Ferris Professor of Journalism at Princeton University most recently in the Fall of 1992. He has had articles published in most of the national magazines. He was a National Sigma Xi lecturer, and a member of the board of editors of the American Scholar for which he wrote a column "Out of My Mind." He is a fellow of the American Physical Society, was a Benjamin Franklin Fellow of the Royal Society of the Arts and a member of the French and American Alpine Clubs. He was born in Rochester, New York on December 31, 1929, and educated at Harvard University; all three degrees. He lives in New York City and Aspen, Colorado. His scientific research interest is in the theory of elementary particles and cosmology.