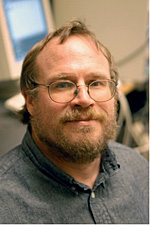 
"For their collaborative contributions to our understanding of intramolecular dynamics by high resolution spectroscopy and to atomic and molecular spectroscopy in liquid He nanodroplets, through the experimental and theoretical development of molecular and cluster beam spectroscopy."


Kevin Lehmann graduated from Cook College, Rutgers University in 1977 with majors in Chemical Physics and Mathematics. He was awarded a Ph.D. in Chemical Physics from Harvard University in 1983, having studied with William Klemperer. Kevin was a Junior Fellow in the Harvard Society of Fellows from 1983-86. During this time and for several years after, he was a visiting scientist at the George Harrison Spectroscopy Laboratory of MIT. Kevin joined the Chemistry Faculty of Princeton University in late 1985, was promoted to Associate Professor in 1991 and to Full Professor in 1995. That year he was elected as a Fellow of the American Physical Society. Kevin has also received a Presidential Young Investigator Award, The Dreyfus Teacher-Scholar Award, and the Thomas A. Edison Patent Award.

Kevin's early research focused on using high resolution molecular spectroscopy to study Intramolecular Vibrational energy Redistribution (IVR) in small polyatomic molecules. He was among the first to apply nonlinear dynamic and quantum "chaology" to the study of the spectroscopy of molecules. Kevin also pioneered the development of double resonance spectroscopy to assign highly perturbed molecular spectra, and more recently the continuous wave Cavity Ring Down Spectroscopy method. In 1987, Giacinto Scoles and Kevin began their highly productive collaboration. Their early work focused on using single and double resonance molecular beam spectroscopy to study IVR in medium to large polyatomic molecules. More recently, they have used these methods to study the dynamics of atoms and molecules dissolved in or attached to superfluid helium nanodroplets.