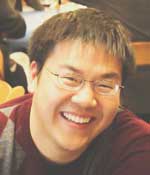 
Norman Yao received his undergraduate degree in 2009 from Harvard University. There, he pursued research in soft condensed matter physics under the guidance of Prof. David Weitz. His undergraduate thesis on “nonlinear mechanics in biopolymer networks” was awarded the Captain Jonathan Fay Prize. Norman decided to remain at Harvard to pursue graduate studies in Professor Mikhail Lukin's group. Supported by both a DOE Computational Science Graduate Fellowship and an NSF graduate fellowship, his research focused on a variety of topics in atomic, molecular and optical (AMO) physics that interface with condensed matter and quantum information. His dissertation explored the simulation of topological phases and many-body localization in ultracold polar molecules, the realization of quantum primitives based upon Nitrogen-Vacancy defects in diamond, and the modification of RKKY interactions by superconductivity. Since defending his thesis in 2014, he has joined the University of California at Berkeley, where he works as a Miller Fellow in collaboration with both the AMO and condensed matter groups.