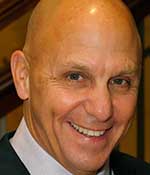 
"For creative and novel use of the hard x-ray free electron laser to isochorically create high density plasmas and accurately measure the ionization potential depression, and for new theory that addresses discrepancies with long standing models and provides stimulus for continued developments."


Richard W. Lee was educated at the Johns Hopkins University and received his Ph.D. in physics from University of Florida in 1970, he then did post-doctoral research at Imperial College, London. He joined the faculty at Imperial College in 1972 leaving in 1984 for Lawrence Livermore National Laboratory (LLNL). During this period, he developed techniques, now widely used, to analyze the radiative properties of hot dense matter laboratory plasmas. At LLNL he became the leader for applied physics experiments on high-energy lasers and continued to develop theoretical techniques for plasma spectroscopy. He served as an Associate Editor for the Journal of Quantitative Spectroscopy and Radiative Transfer specializing in the area of high energy density research. Lee is currently leading the development of high energy density research on the 4th generation x-ray light sources in Europe and the United States and is the Associate Director of the University of California Institute for Material Dynamics in Extreme Conditions and the Editor-in-Chief of the High Energy Density Physics journal.