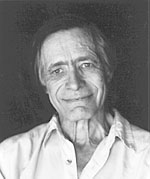 
"For his deep contributions and sustained leadership in the field of turbulence theory. His quantitative predictions for the inverse cascade in two-dimensional turbulence, his treatment of passive scalar transport, and his direct interaction approximation are landmark achievements."


Dr. Kraichnan received his S.B. degree in Physics from M. I. T. in 1947 and his Ph.D. in Theoretical Physics from M. I. T. in 1949. He has been a research member at the Institute of Advanced Study (Princeton) and the Bell Telephone Laboratories, a research associate at Columbia University and Courant Institute at New York University, but has been self-employed for much of his professional career. He has served as consultant, contractor or grantee for the Naval Research Laboratory, NASA, Woods Hole Oceanographic Institute, M.I.T - Meteorology, Institute for Defense Analyses, Princeton Applied Math. Dept., the National Science Foundation, and the US Department of Energy.

Dr. Kraichnan is a Fellow of the APS and a member of the AAAS as well as the American Meteorological Society. His previous honors include The American Physical Society's Otto Laporte Award, and the ADION Medal from the Observatoire de Nice.