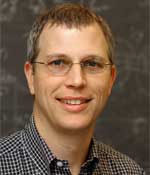 
"For development of techniques for high frequency measurements of mesoscopic physics and quantum noise, including the radio-frequency single-electron transistor and absolute thermometry based on electron shot-noise."


Robert J. Schoelkopf, the William A. Norton Professor of Applied Physics and Physics at Yale University, is noted for his research on quantum transport, single-electron devices and charge dynamics in nanostructures. He and his laboratory team invented the Radio-Frequency Single-Electron Transistor, an electrometer capable of measuring sub-electron charges on nanosecond timescales. In 2007, a team of scientists led by Schoelkopf and Steven Girvin engineered a superconducting communication bus to store and transfer information between distant qubits on a chip. Schoelkopf's current research focuses on further developing superconducting circuits that might serve as practical quantum information processors.

A graduate of Princeton University, Schoelkopf worked as an electrical/cryogenic engineer in the Laboratory for High-Energy Astrophysics at NASA'a Goddard Space Flight Center from 1986 to 1988. After earning his Ph.D. at the California Institute of Technology, Schoelkopf joined Yale as a postdoctoral researcher in 1995 and became a faculty member in 1998. Schoelkopf serves as director of the Yale Center for Microelectronic Materials and Structures and as associate director of the Yale Institute for Nanoscience and Quantum Engineering.

Schoelkopf was a semi-finalist for Discover magazine's Technological Innovation of the Year in 1999. His other honors include NASA's Technical Innovator Award. He is a fellow of the American Association for the Advancement of Science an the American Physical Society.