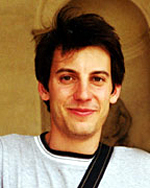 
Tom Weinacht was born and raised in Toronto, Canada. He attended the University of Toronto as an undergraduate student. He received his BS in 1995 from the University of Toronto and his Ph.D. while attending the University of Michigan where he pursued graduate studies and worked with Phil Bucksbaum on experiments in atomic an molecular physics. His thesis work centered on experiments that used shaped ultrafast laser pulses and feedback in order to control atoms and molecules. Tom is currently a research associate at JILA with the group of Margaret Murnane and Henry Kapteyn. He will be joining the physics faculty as an assistant professor at the State University of New York, Stony Brook in the Fall of 2002.