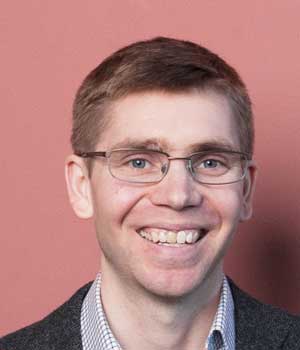 
"For the article, ‘Proof of the finite-time thermodynamic uncertainty relation for steady-state currents,’ published in Phys. Rev. E *96*, 020103(R) (2017), which demonstrated significance, rigor, and broad impact in the general area of non-equilibrium thermodynamics."


Todd Gingrich is an assistant professor of chemistry at Northwestern University. Following his undergraduate studies in chemistry at Caltech, Todd earned an M.Sc. in theoretical chemistry from the University of Oxford as a Rhodes Scholar. He subsequently was a Hertz Fellow and a National Science Foundation Graduate Research Fellow, completing his Ph.D. in chemistry at the University of California, Berkeley in 2015 under the guidance of Phill Geissler. At Berkeley, he developed interests in large deviation theory and stochastic thermodynamics, interests central to his work at MIT, where he studied thermodynamic constraints on kinetic fluctuations, proving several versions of so-called Thermodynamic Uncertainty Relations in close collaboration with Jordan Horowitz.