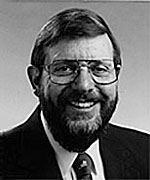 
"For pioneering experiments in laser cooling and trapping, including the first demonstrations of Zeeman cooling, the magnetic trapping of neutral atoms and the extension of laser cooling below the Doppler limit."


William D. Phillips received a B. S. in Physics from Juniata College, Huntington, PA in 1970 and his Ph.D. from MIT in 1976. After two years as a Chaim Weizmann postdoctoral fellow at MIT, he joined the staff of the National Institute of Standards and Technology (then the National Bureau of Standards) in 1978. He is the leader of the Laser Cooling and Trapping Group in the Atomic Physics Division of NIST's Physics Laboratory.

Dr. Phillips has received many awards and honors, including election as a NIST Fellow, the Michelson Medal of the Franklin Institute, and most recently the 1997 Nobel Prize in Physics for his work in laser cooling and trapping. He is a member of the APS, the Optical Society of America, the American Academy of Arts and Science, the National Academy of Sciences, Sigma Xi Research Society, and the Society of Physics Students.