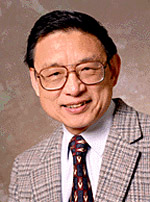 
"For his contributions to the basic understanding of the interaction of light with matter, and for his development of novel linear and nonlinear techniques for pioneering studies of semiconductors, liquid crystals, surfaces and interfaces."


Dr. Shen received his BS degree from the National Taiwan University in 1956 and his Ph.D. from Harvard University in 1963. After a year of postdoctoral work at Harvard, he was appointed to the physics faculty of the University of California at Berkeley where he has been ever since. He has also been associated with the Lawrence Berkeley National Laboratory since 1966.

Dr. Shen was a Sloan Fellow, a Gugggenheim Fellow, and a Humboldt Awardee. He has received several prestigious awards including the Charles H. Townes Award of the Optical Society of America in 1986, the 1992 Arthur L. Schawlow Prize of the American Physical Society, and the Max Planck Research Prize of the Max Planck Society, Germany in 1996. He is a member of the American Academy of Arts and Sciences, the National Academy of Sciences and the Academia Sinica. He also is a foreign member of the Chinese Academy of Sciences.