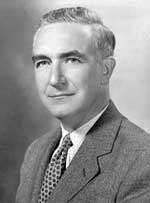 George E. Valley, Jr. received his PhD in physics from the University of Rochester in 1939. He was named a National Research Fellow in nuclear physics in 1940 and was Project Supervisor and senior staff member of the Radiation Laboratory at MIT from 1941 to 1945. He was on the faculty at MIT from 1946 to 1974, was one of the founders of MIT Lincoln Laboratory, and was Chief Scientist of the Air Force in 1957-58. His areas of research included: Artificial Radioactivity, Mass Spectroscopy, Cosmic Rays, design of Radar Systems and invention of the SAGE Air Defense System.