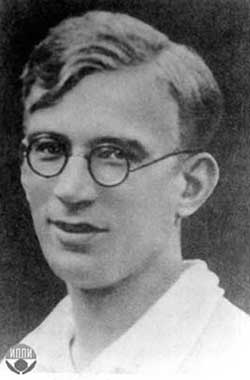 Russian scientists honored the late George Gamow with a session in his name at the annual meeting of the Russian-American Science Association (RASA-USA) on November 7 and 8. The meeting was held in Washington, DC at George Washington University (GWU), where Gamow was a professor between 1934 and 1956. The joint session of RASA-USA, GWU, and APS celebrated the life and work of the Russian- American physicist born 111 years ago.

Gamow was well known for his varied contributions to physics, said William Briscoe, chair of the GWU physics department, in a summary of Gamow's time at GWU. He noted that a plaque at GWU details Gamow's achievements, including his role in the development of the Big Bang theory, his explanation of nuclear alpha decay by quantum tunneling, as well as his contributions to the understanding of DNA.

Gamow was also an author of beloved books on science for the public, particularly his Mr. Tomkins series, published between 1940 and 1967, which follows the inquisitive bank teller Mr. Tompkins, as he learns about physics through strange adventures that take place in his dreams — often as he dozes off during a lecture on modern physics.

George Gamow's son spoke about his memories of his father. "I cannot tell you that I look in the mirror and see my father," Igor Gamow said, but he did indicate some traits they share. "Father is known for his sense of humor, for his jokes, and I remember painfully listening to him tell the same joke over and over again... and I vowed I would never do that." But, Igor Gamow added, he now tells people that anecdote about his father over and over again.

Igor Gamow also shared his memories of physicist Edward Teller, and the close friendship Teller had with George Gamow. "The strangest thing about father, according to Edward Teller, is that he was almost always wrong in his physics. What was marvelous was he didn't care if he was always wrong, because when he was right, he was very right, and it was very exciting." Igor Gamow added, "He didn't care if his jokes weren't funny, either."

When asked by a member of the audience to share his memories of his mother, Gamow said, "She was always correcting father's physics."

Following Igor Gamow's talk, Vladimir Shiltsev of Fermilab gave a "Gamowian" talk about some intriguing, unproven, and controversial ideas in modern physics, including unexplained bumps in the Large Hadron Collider data, the possible detection of dark matter by the DAMA/LIBRA experiment, and hints that the gravitational constant might vary with time. Igor Moskalenko of Stanford University followed this with a talk about recent discoveries in cosmic ray physics.

The importance of sustaining the scientific bonds between the U.S. and Russia was stressed at the meeting. In a welcome address, Amy Flatten, APS director of international affairs, said "The American Physical Society has been trying to strengthen its collaboration and communication with the Russian scientific community." The Ambassador of the Russian Federation to the United States, Sergey Ivanovich Kislyak, addressed the crowd in Russian, saying through an English translator, "I think that in Russia and in the U.S. there is interest in maintaining scientific connections."

RASA-USA honored two of its most prominent members with the 2015 George Gamow Awards at the meeting. The awards recognized Igor Efimov of GWU for "his contributions to the biophysics of [the] heart, cardiovascular engineering, and imaging" and his role as the first president of RASA, and Vladimir Zelman of University of Southern California for "his seminal contributions to neurology and neurological surgery and tireless efforts to promote best scientific practices in Russia." RASA-USA established the awards to "recognize outstanding scientific contributions of Russian-speaking diaspora and efforts to promote international recognition of Russian science and Russian heritage."

Speaking about his father's love for science, Igor Gamow added, "His whole life was science. It wasn't something he did 9 to 5. And I think he was so successful because he thoroughly enjoyed it."