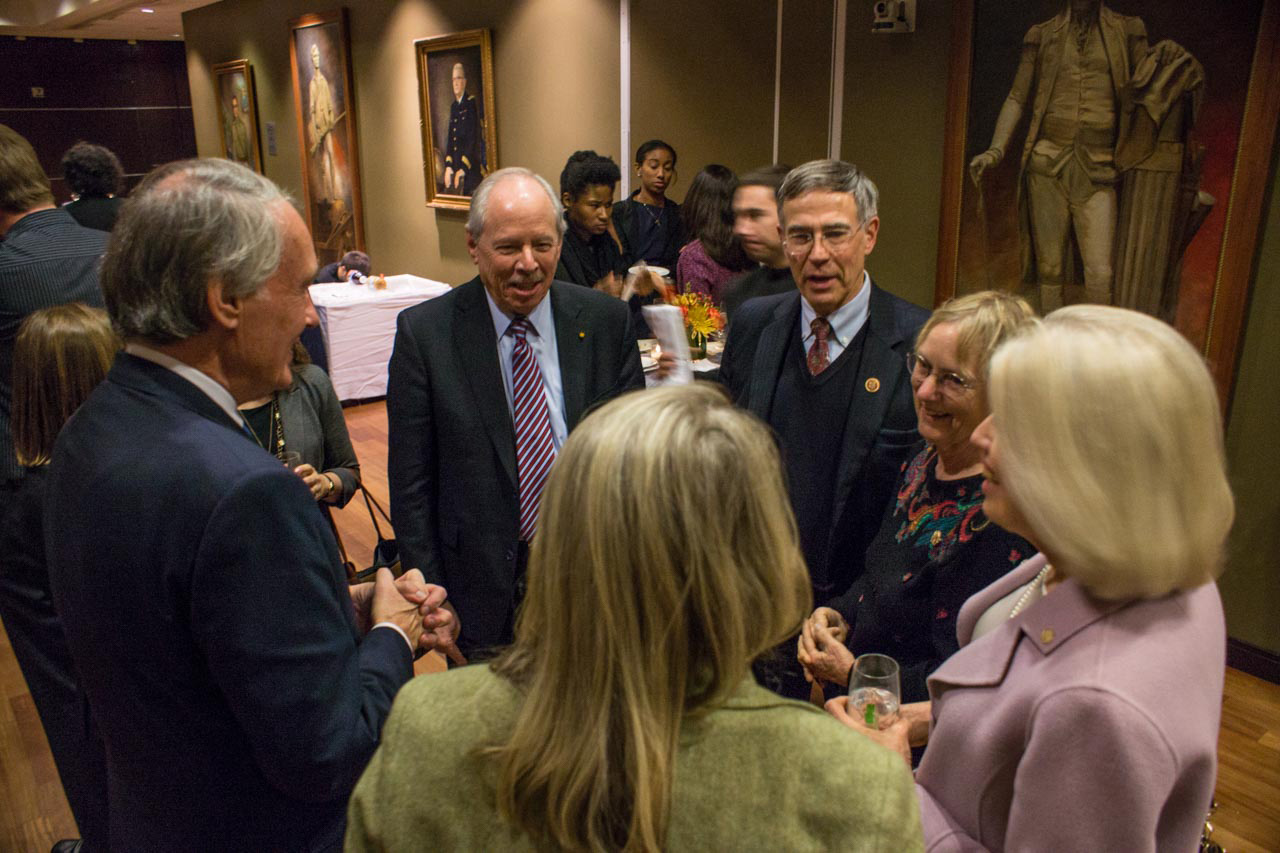 The event was held a day after the departing lawmaker announced he would take the job of Chief Executive Officer at the American Association for the Advancement of Science (AAAS). Formerly a plasma physicist, Holt was a staunch defender of science and science funding in Congress.

"We need scientists in Congress," Holt said. "Until we reach that golden age where all citizens, all well educated citizens, are comfortable dealing with science, we need actual trained scientists in the legislature. I am honored to have been able to fill that role for now eight terms."

APS Executive Officer Kate Kirby highlighted his work, including $22 billion in funding for research in the economic stimulus package of 2009. "He will be missed on Capitol Hill not only for his unending support for science, but also for the intelligent and articulate discourse in which he engaged during his entire political career," Kirby said. "At a time when science is less bipartisan than it has historically been, Rush has vociferously called for evidence-based debate, particularly on hot-button issues like climate change."

House Minority Leader Nancy Pelosi (D-Calif.) echoed Kirby's comments, highlighting his support for both research budgets and legislation backed by data. "Science has no better friend… because he has been a relentless, persistent, dissatisfied advocate for science and science funding, and he knows of what he speaks," Pelosi said.

Representative Bill Foster (D-Ill.), another physicist turned congressman, said that he would miss having Holt's input on complex issues. "You can hardly name an issue that does not have a technological edge to it and there is no substitute to having someone in the cloakroom and say 'Hey, what's the deal with this?'" Foster said.

Members of Congress in attendance also commented on the changing political discourse regarding science, and Holt's steadfast defense of research. "I'm not a scientist, but I'm smart enough to know what I don't know," said Rep. Jim McGovern (D-Mass.). "It amazes me at the contempt that some have for science, and it's important for us to elect people like Rush to Congress, who will actually speak out and defend the fact that it's ok to be smart [and] it's ok to rely on smart people to give you the best guidance on how to proceed on certain things."

Holt expressed concern about the direction that debates about science seemed to be going, and promised as the future CEO of the AAAS he would continue to fight for science. "[Rep. McGovern] never thought, nor did I think, that we would have to defend the very idea of science on the floor," Holt said, referring to that day's fierce floor debate over a bill to limit the Environmental Protection Agency's regulatory power. "I figured there would be arguments about misunderstandings of science… but the idea that empirically based, peer-reviewed work is the best path to reliable knowledge, shouldn't be questioned. But it was even today."

Rep. Jerry McNerney (D-Calif.) said that AAAS would do well with Holt at its helm. "The challenge is that we need to communicate what science is, its importance and how it affects our lives to the people of this country and I'm afraid right now we're not where we need to be," McNerney said. "I think having Rush in this position with his dedication and his knowledge and his fine personality, it's really going to make a difference."