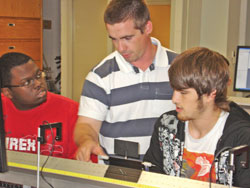 The APS and the American Association of Physics Teachers (AAPT) recently received a $750,000 award from the National Science Foundation (NSF) to provide Noyce Teacher Scholarships to approximately 30 future physics teachers over the next 5 years. These teachers, who will receive up to $15,000 of scholarship support per year for up to two years, will be selected from institutions participating in the PhysTEC project. PhysTEC is led by APS, AAPT, and the American Institute of Physics (AIP), with the goal of increasing the number of qualified high school physics teachers in the US.

Funding for the scholarships comes from the NSF’s Robert Noyce Teacher Scholarship program, which is designed to support future science, technology, engineering, and math teachers. The Noyce program began in 2002, and as of Fall 2007 had supported approximately 1500 teachers from 91 institutions. For every year of scholarship support teachers receive, they commit to teach for two years in a “high-need” school district, which is defined as any district in which at least one school has a high proportion of low-income students or out-of-field teachers, or a high teacher turnover rate.

These criteria include a significant fraction of schools in the US, not just the most needy. According to Gay Stewart, a University of Arkansas physics professor and PhysTEC site leader who also administers an independent Noyce project, “the problems of teacher turnover and out-of-field teaching are so widespread, especially in science, that my Noyce teachers are easily able to find qualified high-need schools to work in.”.

“The Noyce scholarships allow my students to spend their time learning to teach instead of working or worrying about loans” Stewart says. “We have an award-winning Master of Arts in Teaching program, but it is full time, and students don’t get support or have time to work. We should not ask our students to choose teaching over higher-paying professions, and then tell them they need to go into debt to become a teacher.” Arkansas awarded 17 Noyce scholarships—including 7 to future physics teachers—in 2007-2008, its first year of Noyce funding.

In addition, PhysTEC institutions Cal Poly San Luis Obispo, Florida International University, and the University of Minnesota have all received independent Noyce awards during this round of funding, which will also support teachers in multiple science disciplines.

According to NSF Program Officer Joan Prival, the PhysTEC Noyce award is the first to focus on a single science discipline, as well as the first given to a professional society. Monica Plisch, APS assistant director of education and principal investigator, explains that “by pooling applicants from multiple universities, APS and AAPT are able to award these scholarships entirely to future physics teachers, who are the hardest teachers for schools to hire in any math and science field. We are especially excited that the PhysTEC Noyce project will allow us to place teachers in the underserved communities where they are needed the most.”