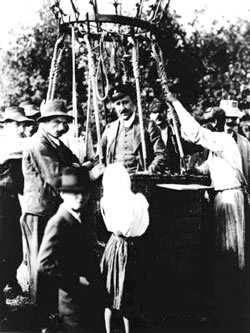 Austria, 1912:  Victor Hess in the balloon from which he discovered "penetrating radiation" or cosmic rays. 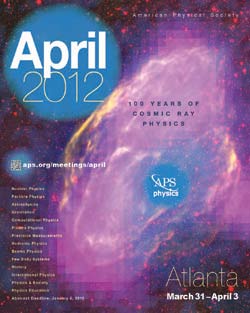 The 2012 APS April Meeting will be held at the Hyatt Regency Atlanta in Atlanta, Georgia from March 31 through April 3. This year’s theme is “100 Years of Cosmic Ray Physics,” commemorating the April day in 1912 when Victor Franz Hess accompanied an electroscope into the sky in a balloon and discovered a fourfold increase in ionizing radiation as the atmosphere thinned out.

The yearly meeting is expected to host about 1,200 attendees and will feature 72 invited sessions, more than 120 contributed sessions, three plenary sessions, poster sessions and a public outreach event with the local science center. In addition, the Sherwood Fusion Theory Conference will be co-located with the meeting.

The meeting highlights the latest research from the APS divisions of Particles and Fields, Astrophysics, Nuclear, Computational, Plasma and Beam Physics. In addition, the forums on Education, Graduate Student Affairs, History of Physics, International Physics, and Physics and Society will be participating, along with the topical groups on Energy Research and Applications, Few-Body Systems, Gravitation, Hadronic Physics, Plasma Astrophysics, and Precision Measurements & Fundamental Constants.
On Saturday, March 31, there will be a keynote plenary session sponsored by the Kavli Foundation. It will feature Alan Watson of the University of Leeds, Ellen Zweibel from the University of Wisconsin, Madison and Samuel C. C. Ting of MIT, speaking about the last century of research into cosmic rays, plasma physics and cosmic rays, and the International Space Station’s alpha magnetic spectrometer respectively.

In addition, the second plenary session, this year’s Nobel Prize session, will be on Monday, April 2, and will feature 2011 laureates Saul Perlmutter of Lawrence Berkeley National Laboratory and Adam Riess of Johns Hopkins University talking about their discovery of the accelerating universe. Rounding out the session will be Frank Wilczek of MIT, who shared the Nobel Prize in 2004 for the discovery of asymptotic freedom in the theory of the strong interactions.

The third plenary session is planned for Tuesday, April 3. Krishna Rajagopal of MIT has been invited to talk about his work on the quark-gluon plasma, what he describes as “the most liquid of liquids.” Zheng-Tian Lu from Argonne National Lab will discuss how single atom traps can be applied to climatology and non-proliferation. Judith Curry from Georgia Tech will talk about the recent Berkeley Earth Surface Temperature project.

Atlanta’s Fernbank Science Center, in collaboration with the APS outreach department, will host a public outreach event during the meeting to get people excited about the 100th year of cosmic ray science.

The recipients of many of APS’s prestigious prizes and awards will be honored at a special ceremonial session on Sunday evening, which will also feature the retiring presidential address by Barry Barish of Caltech, who served as APS President in 2011.

On Sunday, graduate students are invited to Lunch with the Experts. Graduate students can sign up to dine with well-known experts in a field that interests them, in an atmosphere of informal discussion. The list of topics will be available on the April Meeting website in early February, and signups, on a first come, first served basis, will be at the registration booth at the meeting.

Exhibitors from a range of publishers and other vendors will have booths set up around the hotel to display their products.

Meeting attendees will have the chance to stop by the APS Contact Congress booth to send letters to their elected officials about the importance of continued congressional support for scientific research.