Has the US State Department been giving Chinese citizens an especially difficult time obtaining student and exchange visitor visas to come to the United States in the past year or two? 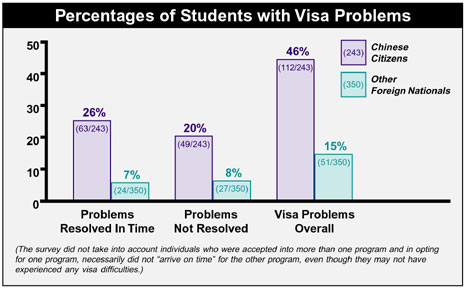 This question has elicited strong debate, with some members of the academic and research community, especially in physics, feeling under siege at what they perceive to be an unfair and arbitrary crackdown on students and scientists from China, and in some instances, from other countries. They say this crackdown has harmed scientific inquiry and damaged graduate programs, particularly those in physics, around the country.

But the State Department unequivocally denies charges of any crackdown or change in policy as "simply not true," citing figures that show steady increases over the past several years in the number of people from China coming to the US under student and exchange visitor visa categories. These figures show steady increases in the number of "F1" student visas issued to people from China each year since fiscal 1998, including a nearly 10 percent jump from fiscal 2000 to fiscal 2001 (ending September 30). The State Department also says that the refusal rate for Chinese student visa applicants was markedly lower in fiscal 2000 than in the prior two fiscal years. (Refusal rates for fiscal 2001 were not provided.)

Helping to set the dimensions of the problem are the results of a survey, conducted this September by the APS, of the heads of the 254 PhD- and Masters-granting physics graduate programs in the United States. Among the respondents, 54 percent said they have encountered sudden and unusual problems getting visas for Chinese citizens or other foreign nationals entering their programs, while 46 percent said they did not.

While the survey found that Chinese students seeking visas for the 2001-2002 academic year experienced difficulties at a rate almost four times that of other foreign nationals, this rate was the same as the State Department's student visa applicant refusal rate for all Chinese citizens in both fiscal 1998 and 1999. This indicate little had changed in the past three years except the perception of a problem.

Clouding the picture are the horrific events of September 11, 2001, which have abruptly and dramatically changed the political agenda and put any proposed changes in student visa categories on ice for some time to come.

The issue has generated increasing controversy and confusion in the past year. News articles have appeared in the Chronicle of Higher Education and in the New York Times, and an op-ed piece appeared recently in the Wall Street Journal.

According to the Times report, there is no question in China but that the US Government has cracked down arbitrarily and unfairly on Chinese students. It cited numerous multi-part series and angry editorials that have appeared in Chinese newspapers, while internet chat rooms have vented against the handful of overworked American visa officers in one of five consular offices around China who issue thousands of visas each year.

In the US, colleges and universities have complained to the State Department, while a number of physics departments have contacted the APS detailing their problems in getting student and visitor exchange visas.

"Until about 1998, we never had a case where an F1 visa was denied. In fact, it never occurred to me that a student with an I-20 (a document required of international students before a student visa can be issued) would not get an F1 visa," said Kurt Haller, the head of the physics graduate program at the University of Connecticut, Storrs. "One person was denied in 1999 and couldn't come and one was denied in 2000, but subsequently accepted. This year, we accepted seven Chinese students, but only two received an F1 (and) five were denied. That's a big jump."

At the University of Utah in Salt Lake City, Heidi Frank deals with international student issues for the physics department. She expressed a great deal of frustration because all ten of the Chinese students accepted into the department were rejected on their first attempt.

Frank recounted how she ultimately was able to get seven of the ten into the program through the intervention of Utah Sen. Orrin Hatch, who sent letters on behalf of the students to the US embassy in Beijing. The other three have had to defer their admissions to at least Spring 2002, with no guarantee that they will get their visas then.

"I faxed petition letters to the embassy and consulates on behalf of the students. The embassy faxed back a very rude letter informing me that I had no right to send anything to the embassy," Frank said. "Apparently, the embassy workers forget that the taxes I pay to the government pay their salaries."

At Pittsburg State University, a small school in rural southeastern Kansas, physics department chair Chuck Blatchley said difficulties getting Chinese and other international students, combined with a drop-off in enrollment by American students, are jeopardizing the very existence of his department's small master's program.

"We were down to one MS student two years ago. This year, we are back up to five, but none of several applicants from China made it into the country," Blatchley said. "In our program review last year, we were asked to justify keeping the MS program running if we did not have enough applicants to fill our three existing graduate assistantship positions."

Blatchley's program was put on a probationary status for three years even as stipends were increased somewhat to see if the larger amount of money attracts more students. If not, he said, the program will likely be disbanded.

But do cases like these genuinely reflect a larger problem, or are they relatively isolated? The APS survey of physics graduate programs around the country had decidedly mixed results.

Of the 90 replies received - representing just over one-third of all the physics graduate programs in the United States - 49 said they had encountered sudden and unusual problems getting student visas for Chinese or other foreign nationals entering their program in the 2001-2002 academic year, while 41 said they had not.

The 49 programs that encountered problems accepted 243 Chinese citizens and 350 other foreign nationals. Of these 243 Chinese, 63, or 26, percent experienced at least one student visa refusal but ultimately secured their visas and arrived on time in the US into their programs, while another 49, or 20, percent were unable to get their student visas on time and hence were unable to start their programs. So overall, 112 Chinese citizens, or 46 percent, had some type of student visa difficulty.

This 46 percent rate of refusal for Chinese student visa applicants seeking to enter US physics graduate programs matches very closely with the State Department's own reported refusal rate for all Chinese student visa applicants for fiscal 1998 and fiscal 1999. That rate "hovered between 45 and 47 percent" before dropping to 33 percent in fiscal 2000, a fact that "hardly seems to indicate tougher standards than in the past," according to Chris Lamora, spokesman for the State Department's Bureau of Consular Affairs.

Lamora said that all of these figures outweigh the anecdotal evidence. "The State Department does recognize and understand visa applicants' frustration when they fail to obtain student visas. However, the anecdotal 'evidence' that somehow the process has become more difficult of late is simply not supported by the facts. There have been absolutely no changes in the procedures or policies our consular officers abroad use to access Chinese citizens' applications for student visas," Lamora said.

Carl Shakin, who oversees the physics graduate program at Brooklyn College, one of the five main campuses comprising the City University of New York system, criticized this aspect of the law as essentially arbitrary and subjective.

"They can use this argument that the (applicant) really seems to have intentions of emigrating to the States. They can always use that argument. No one can really prove otherwise," Shakin said.

Historically, the overwhelming majority of Chinese citizens who have come to the US on student and other visas have ended up staying in the country permanently. The State Department cites this fact as evidence that it really does not make it tough for visa applicants. Others like Shakin see this fact as a good thing for the country.

"Chinese citizens work in the industries like finance and information technology and are a major asset to the country," he said.

During an August meeting at the State Department between a group of university admissions personnel, physics researchers, and APS staff members on one side and State Department and Immigration and Naturalization Service officials on the other, there was discussion of ways the student visa process could be smoothed out. One possible solution was the creation of yet another visa category.

However, the events of September 11, 2001 have ended the effort to create a new visa category, according to Irving Lerch, the APS Director of International Affairs. "The 'new visa' issue is dead - for the moment," he said. "There are people in the [consular affairs] bureau who are sympathetic, but now is not the time to press the case."

Lerch said any initiative for a visa category would have to come from Congress and have the okay of the immigration service. "If I were to raise this issue again, it would be directly with the Immigration and Naturalization Service staff," he said.