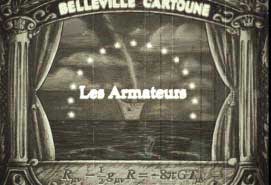 Earlier this year an animated feature called The Triplets of Belleville was playing in movie houses around the country. It got some attention from the critics, and garnered two Oscar nominations (for best animated feature film and best original song). Among its many interesting attributes is something that was probably noticed by only a very tiny segment of the audience: as the opening credits run, the bottom of the screen displays Einstein’s field equations of general relativity (see illustration).

There is no obvious reason for this. Neither Einstein nor physics plays any role in the film itself. The film is a French/Belgian/Canadian collaboration, directed by Sylvain Chomet of France. What were they thinking? Or is this just an act of whimsy with no particular raison d’être? If any of our readers has either some inside knowledge, or a good theory as to why the equations are there, we would be eager to hear about it. We will even offer a copy of the coffee-table book “Physics in the 20th Century” for a particularly convincing explana