Emergent Physics at the Mesoscale 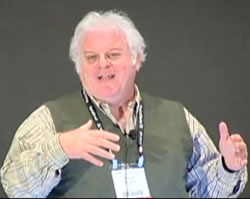 Bob Laughlin regales the audience with tales of "Mesoscopic Lawlessness"

This year the APS March Meeting put a focus on the Meso realm, featuring a special session devoted to the topic. The session was special for many reasons. First, it was made possible by the generous support of the Kavli Foundation. It was arranged with a plenary flavor in that a number of other invited symposia that might have competed for an audience were moved to other time slots. The largest ballroom on the top level of the Boston Convention Center was used for this event alone, providing seating for over 2,000. Most importantly, the event was special because of the outstanding presenters who participated, and the atmosphere that they created. This report provides an overview of the session and what the topic of Meso can motivate in the future.

In 2011, the Kavli Foundation underwrote special superconductivity centennial sessions, a pure love-fest for the March Meeting, hailing a history of accomplishments that took us back to the laboratory of Kammerlingh Onnes, while also bringing us into the future with the recent mysteries of the pnictide materials. The 2012 special session was different. It took us a bit away from our comfort zone to occupy new space by thinking Meso. In 2012 we could have celebrated 50 years of the Josephson junction, or 25 years after the Woodstock of Physics that occurred at the 1987 March Meeting where the discovery of cuprate superconductivity unfolded in real time in an all-night session where new results were being called in, and graphs were faxed in only minutes before being presented. But superconductivity was covered in 2011, so 2012 seemed the right time to stretch, to renew our field, and think broadly and strategically of the new horizons ahead that Meso might represent.

Meso denotes the middle, thus it was appropriate for the session to be held in the middle of the March Meeting, on Wednesday, February 29th. APS Executive Officer Kate Kirby moderated the session, introducing the distinguished speakers in turn, but first making history with the memorable statement that, unlike the nanometer (for the nanoscale), “there is no mesometer.” Mesoscale is, in other words, not a length scale, nor is it a time scale. What is it? It’s any physical realm between endpoints, such as the transitional realm between micro and macro scales, between quantum and classical, between biomolecular components and living structures. It has enough of an elusive quality to it that it might just become a new way to capture our essence.

The official title of the session was “Emergent Physics at the Mesoscale,” its purpose to initiate a dialogue to define scientific opportunities at the Mesoscale for the next decade. A goal was to reinvent Meso science and to create an engaging narrative to inspire the next generation of researchers, much as Nano did this past decade. The organizers also hoped to energize science policy makers, our sponsors, and an enlightened public as to the deep and intriguing questions posed by Mesoscale science. We hoped to embrace opportunities that are theoretical, computational and experimental, basic and applied, and that span the areas of condensed matter, complex functional materials, quantum information science, and biological, chemical and medical physics, including soft-matter self-assembly. Examples of seminal questions include: are there as yet undiscovered rules that govern mesoscale phenomena? On the road from Nano to Macro, what challenges does the mesoscale pose? What new scientific tools and facilities are needed to explore the Meso realm? How can mastering the Meso realm benefit society at large?

Those approached to speak were mostly stunned for one reason or another, and hesitant, not realizing that they were engaged in mesoscale science, or finding it verging on sacrilege that their science would be presented under a banner that invokes Emergence. But all agreed to participate despite their various disavowels. Bob Laughlin of Stanford was the first speaker. He described and embraced the concepts of Emergence and the Middle Way with great eloquence and humor. As the person who literally wrote the book on Emergence, and thus, the need to realize that there are organizational principles on every scale, he defined Meso in an all-encompassing way that reached out to include much of nano, bio, and correlated electron physics. Individual nano objects interact giving rise to new behavior. Biomolecules form into organelles and then organize into cellular structures. Correlated electron systems undergo various collective condensations with characteristic correlation lengths that generally are neither on the atomic nor macroscale. Laughlin made it clear that to embrace the concept of Emergence implies leaving reductionism behind. His presentation totally captivated a full house.

Yet, is it really possible that our diverse community could speak with one tongue, could gather under a single banner, much like the particle physicists who, in lockstep, tout the quest for the God particle? Not so fast…Reality soon set in as Bill Phillips of NIST took the podium. He approached his task as a boxer would enter the ring, first climbing through the (imaginary) ropes of the arena, then warming up (his laptop) as he was introduced. He made short shrift of the concept of emergence, discarding it mercilessly, and with it our hopes of unity. He presented his elegant experimental work on ultra-cold trapped atomic gases, simple ingredients that display complex and unexpected collective behaviors. But, wait… are these not perfect examples of Emergent behavior on the Mesoscale? Of course they are. But as two towering giants of physics, Laughlin and Phillips, Nobelists separated in their award dates by a mere year, disagreed profoundly, their audience was left suspended, unable to adopt a single voice. Simple ingredients–two speakers–and already those who gathered witnessed a fundamental aspect of Emergence, the inability, the impossibility of control.

How to proceed? I think back to the early days of Nano, and how physicists greeted it with a thud because we had been engaging in atomic scale research for the past thirty years at least. Atomic scale certainly transcended Nano. What was the big deal about Nano? But the funds appeared, and no one even remembers now what an Ångstrom is. Nanotechnology is written about regularly in magazines, and there are even commercial products, such as clothing, that bandy around the name Nano.

Angela Belcher of MIT was the next speaker. Avoiding the philosophical duel, she mesmerized the audience with the wonders of virus-assisted self-organization. The slender, cigar shaped M13 bacteriophage was her favorite. She was too busy, rushing to create new composite materials with energy applications in the real world, to be slowed down by polemics. She painted a picture on a broad canvas of a dazzling array of bio-inorganic material opportunities that await exploration. Is it possible that a spokesperson for the Nano realm could so seamlessly transition to the Meso realm? Angela Belcher showed that it is not only possible, it can readily become fashionable to do so, without sacrifice, without letting go of Nano. Belcher is a fiery speaker, delivering in a fast paced cadence. But the effect was to calm rather than stir the audience. The storm had passed. Belcher ushered in the pure sense of fulfillment and joy of discovery, irrespective of didactic labels.

Bill Bialek of Princeton then took the stage to universal acclaim, demonstrating the integral relationship between experiment, theory and simulation. His message was one of forgiveness. He was not on a quest for the ultimate path to the truth. Even imperfect theories and assumptions can ultimately lead to proper descriptions, because the laws of nature are strong attractors. As a theoretical biophysicist he could take rigorous but minimalist approaches to complex problems and yield delightful insights because he made sure never to stray far from experiment. Thus, his feet are grounded in reality, but his head could still be peering up into the clouds, dreaming of order in the biosphere, due to the action of messenger RNA.

Following the clear and steady message of reason of Bill Bialek, George Whitesides of Harvard rushed in from teaching his large undergraduate class to arrive just on time to present his talk and wrap the session into a tidy bundle. He took the biochemical molecules that Bialek treated via equations and algorithms and put them in multiple settings, discussing their non-equilibrium thermodynamics, the role of entropy, of molecular recognition, of the downfall of the familiar lock-and-key model and of binary approaches in general. He stressed the complexity over the simplicity that Bialek found. He highlighted the role of new tools to open new doors in order to effect scientific revolutions. He covered an enormous stretch of territory, reaching back to reinforce points that Bob Laughlin made earlier about simple laws of Newtonian physics, as well as the unpredictability and surprises that science presents and that fans the flames of our passion for our field.

All in all it was one heady experience. But it wasn’t over when it was over. The Kavli session was followed by another session that was billed as a Town Hall meeting. At this satellite-type event the role and future of mesoscale science was discussed informally in order to help funding agencies (specifically the Office of Science at DOE) to decipher the opportunities and promise of Meso. A website is available to obtain input from the community.

Regardless of your interests, hard matter or soft matter, experiment, theory or computational science, there is the possibility to reinvent ourselves through the new scientific paths we pursue. There is the opportunity to open new sources of research funding if the narrative is sufficiently engaging. Although as a community we do not, and perhaps don’t even aspire to talk with a single voice, our many voices, heard on February 29th, can enable us to leap to new heights.

In closing it is important to thank all of those who contributed to the success of the experience, most notably the speakers, the Kavli Foundation, and the folks at the American Physical Society. The unit organizers of the March Meeting provided input and suggestions that guided the creation of the program. Special thanks go to Barbara Jones of IBM, 2012 Program Chair for the Division of Condensed Matter Physics (DCMP), who worked tirelessly to help bring the special session to fruition. Nandini Trivedi of Ohio State, a member of the DCMP Executive Committee, is credited with recommending the session title, “Emergent Physics at the Mesoscale.” The APS and the physics community are extremely grateful to the Kavli Foundation for its generous support of a special session at the March Meeting for a second year in a row.

Sam Bader, Argonne National Laboratory, was 2012 Program Chair of the APS March Meeting, and Chair (now Past Chair) of the Division of Condensed Matter Physics.