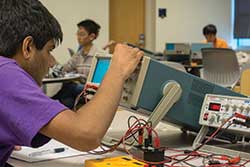 Rohan Kodialam, a junior from High Technology High School, Lincroft, NJ, is one of the students who participated in the training camp for the International Physics Olympiad.

By itself, a flexible, plastic “Hot Wheels” toy car track is pretty mundane. Add a can of racket balls and a team of the top high-school physics students in the country, and you have the makings of an intriguing science experiment.

Each year, the American Association of Physics Teachers and a number of member societies of the American Institute of Physics sponsor a two-week competitive training camp held on the University of Maryland campus at the end of May. The purpose is to select five high school students, from a pool of about 20, who will represent the US in the International Physics Olympiad (IPhO) annual competition. This year, the Olympiad will take place in Astana, Kazakhstan from July 13-21.

Although the complex problem sets and activities are akin to what first and second-year college students see, the experiments can be surprisingly simple and easy for any physics teacher to coordinate. One of this year’s eight lab activities involved no more than a Hot Wheels race track, racket balls and a stopwatch.

“What you get out of it is actually interesting,” said assistant coach, Andrew Lin, who has been part of the coaching team for 14 years, and was a member of the U.S. Physics Olympiad team in 1998 and 1999. “You can tell how hollow the racket ball is.” By timing how long the ball takes to roll down the track, students can calculate its moment of inertia and from that estimate the volume of empty space inside.

Two weeks of non-stop physics would be a daunting prospect for many high school students, but these young adults are unique. This past January 4,277 students took the “F=ma” exam, which consists of multiple choice physics-based questions. The students with the top 300 to 400 scores then completed a free-response, calculus-based exam and from that pool, the 19 students with the highest exam scores packed their suitcases for Maryland.

Most of these students just completed their junior or senior year in high school. For the graduating seniors, this boot camp is one of the last steps before they enter college. Many of them will be attending MIT, Stanford, or the California Institute of Technology this fall.

Some of the younger students, who are still in high school, have yet to take a class in physics, but that does not stop them from seeking out physics topics on their own. Such is the case for the youngest member of this year’s boot camp group, Celine Liang from Saratoga High School in California. Liang just completed her second year in high school and has yet to take the physics course her school offers.

“I did a little physics on my own and I liked it so I kept going,” said Liang, who at first said she was intimidated by the trip to Maryland. “I thought it would be way different but it turns out to be better.”

Liang also qualified for the mathematics Olympiad training camp. Two days after she returns home from Maryland, she is heading off to Nebraska for more numeric fun. And when she’s not taking or preparing for exams she plays violin and tennis, and she swims.

Although Liang will not be one of the five students traveling to Kazakhstan, there is always next year, since every student is allowed two tries for the team. This year’s team, which will be competing against more than 400 students from 92 nations at the IPhO in Kazakhstan, consists of:

Paul Stanley, who is the chair of the physics department at Beloit College and lead coach of the US Physics Olympiad team, described this year’s team as, “A very cohesive, very supportive group.” Stanley will be traveling with the students to Kazakhstan and said he was impressed with both the team the coaches assembled as well as all of the 19 students who attended this year’s training camp.

Shortly before they leave for Kazakhstan, this year’s team will return to the University of Maryland this July. There, they will have three, physics-filled days of past IPhO experiments to prepare them for the competition against the top young physics minds in the world. This preparation will involve about ten hours each day in the lab, Stanley said.

“In some ways, this is the strongest group I have seen, with a number of campers who would have been outstanding at the IPhO,” Stanley said. “The desire to excel in physics and on exams without being competitive was an interesting social dynamic. It was as if each member really wanted all of the members to succeed.”

Learn more about the 2014 US Physics Team on the AAPT Website.