2018 APS Division of Fluid Dynamics Meeting, Atlanta—Five years ago, Roberto Zenit, a physics professor at the National Autonomous University of Mexico, was studying biological flows when art historian Sandra Zetina enlisted him for a project: using fluid dynamics to uncover the secret behind modern art techniques.

At this year’s Division of Fluid Dynamics meeting—his 20th—Zenit, an APS Fellow and member of the editorial board of Physical Review Fluids, presented the work of a cross-disciplinary collaboration that tapped into the minds of influential modern artists.

“I’m not qualified to tell you about art, but I do know that every painting starts in the same place,” said Zenit during his invited talk. “There’s a blank canvas, and then materials to create the art with certain properties, certain viscosities, and densities, and then you need somebody who knows about fluids, a person who has developed certain knowledge about the way the fluids behave. Painting is fluid mechanical.” 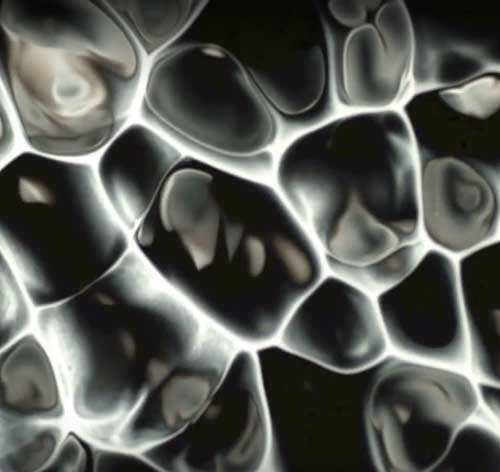 In the 19th century, modern art emerged as an artistic movement through rejection of traditional artistic methods and the adoption of new ideas in painting. The techniques created as part of a 1936 artists’ workshop held by Mexican painter David Alfaro Siqueiros were influential in the development of modern artistic methods that didn’t involve spreading paint with a brush. Famous American painter Jackson Pollock, a student of Siqueiros, was in attendance at the workshop, developing his signature style of dripping.

“When [Zetina] was studying the paintings from Siqueiros during this period, she had the vision to involve fluid mechanics. She came to me with these paintings and asked me this question ‘how do you paint like that? What do you need to know to produce these patterns?’” said Zenit.

Zetina and Zenit combined historical detective work—searching through letters Siqueiros wrote during the 1936 conference and watching videos of Pollock painting—with fluid mechanics experiments to characterize how the artists achieved their signature styles.

Siqueiros described his accidental painting technique in a letter, which Zenit loosely translated: “if there are two pools of paint that are superimposed on top of each, together they can infiltrate [or combine].” Using Siqueiros’ vague instructions, Zenit’s lab began experimenting with layering liquids with different viscosities and densities.

”First, we poured a layer of viscous fluid—black paint in this case—and on top of that, we poured a second layer of paint of a different color. You end up with two-layer pancake. What you see after some time is, progressively as time advances the white paint will infiltrate into the black paint to generate these patterns that are characteristic of this accidental painting technique” said Zenit. “The lines only appear in this manner if the top fluid is denser than the bottom fluid.”

Accidental painting makes use of Rayleigh-Taylor instability, which occurs at the interface between two fluids with different densities as an upper layer of dense white paint pushes on the lower layer of black paint. A slow mixing process occurs as the paint dries, creating the unique texture. Rayleigh-Taylor instabilities are often found in nature, accounting for the appearance of the Crab Nebula for example, and studying their formation is difficult. Using paints, according to Zenit, could provide a medium to help elucidate this phenomenon.

Pollock’s unconventional painting method of dripping paint from a stick over a horizontal canvas also held fluid-mechanical interest for Zenit and Zetina: How did he create the straight, steady filaments of paint that build up to create his art?

“The filaments were laid in a certain rhythmical manner—Pollock allowed himself to be filmed while he was working,” said Zenit. “What we wanted to know is what Pollock knows—we want to explore the physical space in which he works to generate these steady filaments.”

Using historical movies of Pollock painting, Zenit measured how quickly Pollock moved his hands and from what height he dripped paint and built an experimental set-up to test what affected the paint on the canvas. What Zenit found was that, at a reasonable paint viscosity, hand speed was the necessary factor for creating Pollock’s signature straight lines of paint rather than curling coils.

“What we see is that when the speed of the hand is small is when the filament coils because of a buckling instability. Fluid doesn’t have the room to flow freely and it buckles and curls,” said Zenit. “If you move the substrate at a high enough rate, you are able to prevent coiling.”

Understanding how techniques were achieved—thanks to fluid dynamics research—has allowed artists to recreate and reclaim these innovative modern art techniques, integrating them into new works of art. Zenit’s research has also expanded beyond techniques from famous artists of the past: His lab now has an artist in residence, Octavio Moctezuma, a professional watercolor painter, who wanted to understand how physics made his art possible.

“These are techniques that artists do, but they don’t have the tools or terminology to explain it,” said Zenit. “We have learned a lot about artists—they are masters of fluid mechanics, but they don’t know it.”